/ Comic Resource Guides & Articles / [Guide] What Are the Most Valuable Comics From the 1960's?

[Guide] What Are the Most Valuable Comics From the 1960's? 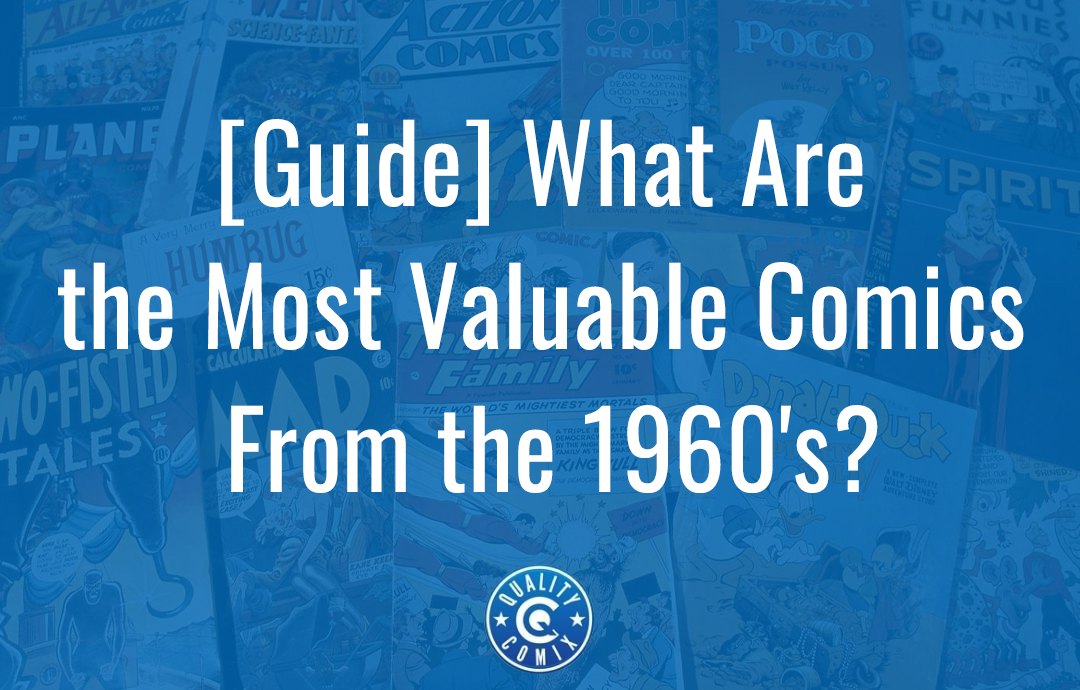 In many ways, the 1960s were a golden age of comics, but there's one important way it wasn't: it was the silver age!

The golden age of comics is considered to be from about 1938 to 1956. The age after that, from 1956 to 1970, is the silver age. The silver age is characterized by an explosion of, well, characters! Comics of all sorts, especially the superhero genre, exploded in popularity.

This phenomenon was predominantly in response to the Comics Code Authority, an agency similar to the modern ESRB and other organizations rating and restricting the content in media. The CCA didn't like horror, crime, or romance books and took steps to prohibit what they thought could contribute to juvenile delinquency and other societal ills.

Of course, the comics industry wouldn't be stopped so easily; they pivoted to superheroes and strong themes of justice, patriotism, and right versus wrong. While we might view some of these morality tales as quaint and lacking nuance today, they were important in their own right as part of the development of the comic medium and the superhero genre.

The 1960s saw a massive wave of new characters being introduced, others being rebooted, and the popularity of some older characters taking off.

Of course, these days, sixty-some-odd years after the start of the Silver Age, the comics published in that era are very collectible. Many of them never withstood the test of time, and while the average silver age comic isn't worth a ton, a few stand out head and shoulders above the rest, just like the namesake heroes stand above the ordinary people of their day.

What are the most collectible and, more importantly, valuable comics from the 1960s? Let's run down the list!

This comic is the single most valuable book from the silver age. Seeing it, you can immediately see why: it's the first introduction of Spider-Man! Now recognized as one of the top superheroes of all time – and starring in some very popular movies, like Into the Spider-Verse – this introduction comic is one of the most valuable comics of all time, not just of the 1960s. 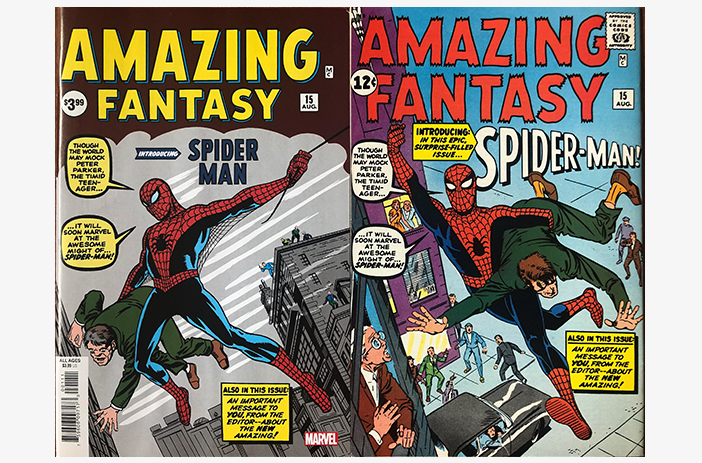 This issue is a must-have for serious collectors of superhero comics, silver-age comics, Spider-Man comics, and Amazing Fantasy. There are so many good reasons to want a copy; it's no surprise that an NM-graded copy sold at auction for over three million dollars!

Another iconic early introduction in the 60s is the Fantastic Four. These four misfits have been on and off team members for ages, but they were first introduced together in the early 60s with the same archetypes they have now, though perhaps somewhat different personalities.

In this issue, you can also see many signs of the coming escalation in superhero powers. Written by Stan Lee and illustrated by Jack Kirby, Fantastic Four #1 features the first appearance of the Fantastic Four, which includes Mr. Fantastic, the Invisible Woman, the Human Torch, and The Thing.

Oh, Ben Grimm as The Thing has been more or less who he is the whole run, but Mr. Fantastic, Reed Richards, has experienced many shifts in character over the years. 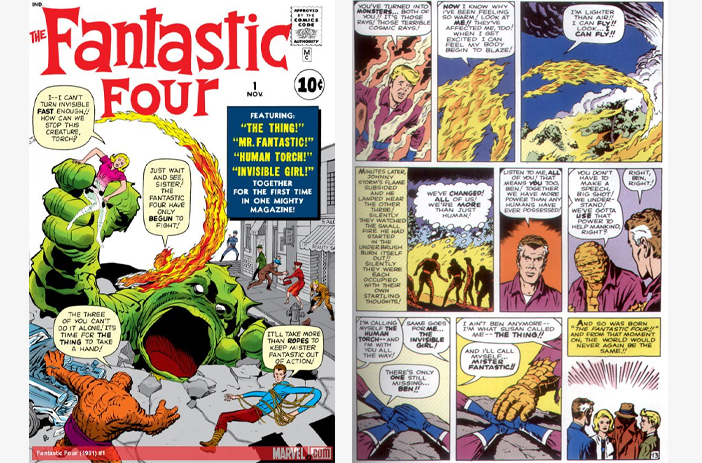 Invisible Girl, for example, was too slow to turn invisible long before her powers involved force fields, light refraction, and whatever else the authors have come up with since.

If you have a great-condition copy on your hands, you can be sure you have something worthwhile.

One of the most widespread and popular superhero comic franchises today is the X-Men. They have a wide range of die-hard fans, especially for specific characters like Wolverine. Even if their movies have been somewhat lackluster – especially compared to the giant that is the Avengers universe – they're still popular. 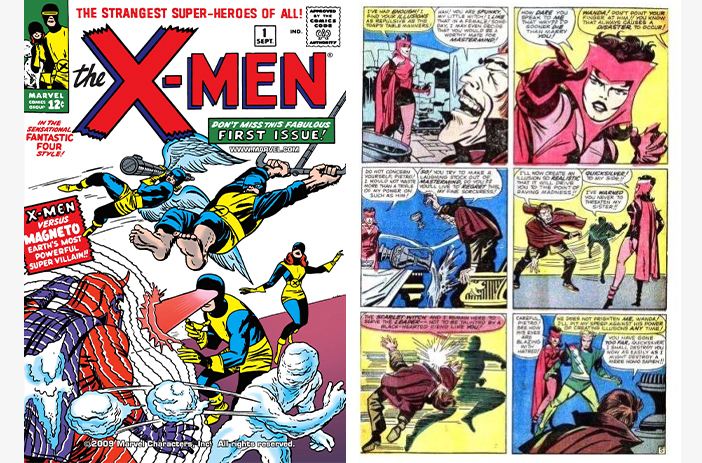 X-Men #1 was one of many debuted by industry giants Jack Kirby and Stan Lee, and you can see many of their hallmarks throughout the issue. Even the cover showcases many of the now-iconic X-Men, like Cyclops and Beast, though some (like Ice Man) are different from their modern incarnations. Comics sure were a different time back then, weren't they?

You can buy this issue digitally directly from Marvel for a meager $2. Still, the high watermark for pricing a graded, good-condition physical copy is around half a million bucks.

As you can see from the dates, the early 60s were packed with the introductions of many of the most iconic heroes (and villains) we see in media today. Of course, plenty of them had very different forms than they do now. 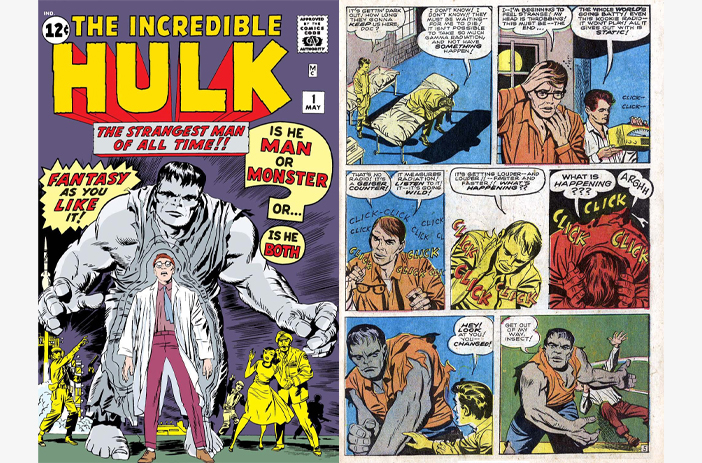 Bruce Banner, for instance, has gone through many different versions over the years. The common through-line of turning into a super-strong hulking monster called the Hulk has stuck, but the details – including the iconic green skin – weren't present originally. He was green almost immediately after that, in issue #2, but originally he was gray. Gray hulk has come back as a distinct character or persona at various points throughout the character's history, including as the Vegas tough Joe Fixit. However, that didn't happen for many years.

Who would have thought an ink error would create one of the most iconic heroes of modern comics?

Many superheroes didn't start in comics titled by their superhero name. More often, they began as characters in more generic comic lines. For every hero that resonated and stuck around, many more saw only a few issues (or weren't brought into prominence for decades when someone mined the old IPs for new ideas.) This scenario is why, for example, Superman didn't start in Superman #1; he started in Action Comics #1.

So it goes with Tales of Suspense #39, the introduction of the now-famous, though quite different, Iron Man. 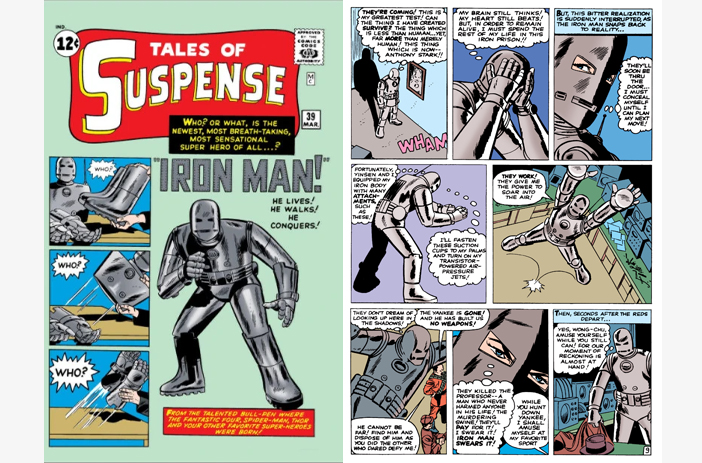 Iron Man back then looked more like a man encased in plate armor and a strange, featureless mask. As usual, with the first appearances of superheroes, Tony Stark and Iron Man have undergone many changes since, including the shift from the flat gray (which has since been adopted by characters like War Machine) to his iconic red and gold.

Team-ups rapidly became a powerful move amongst heroes and villains in comics of this era, and while many such teams have come and gone throughout the years, few have stood the test of time the way the Avengers have. The original Avengers included Thor, Ant-Man, Iron Man, and the Hulk, facing off against Loki as a villain. It's no wonder similar plotlines still resonate through the movies we've seen in the last decade at the box offices, making records there, too. Right? 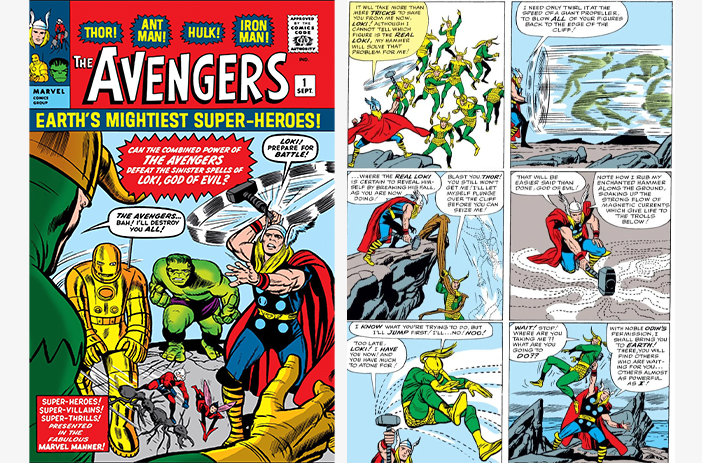 While the specific heyday for this issue has passed (comics like this generally peak when their tie-in media is in high demand, and the Avengers has moved on from this initial story arc), any key issue like a first issue is always going to retain value.

The Avengers #1 is no different, with high-graded copies fetching over $300k easily.

Sometimes, a character starts in another comic but immediately becomes popular enough to have their own books published. Less than a year after his debut in Amazing Fantasy, Spider-Man started his own book in Amazing Spider Man #1, and immediately brought in the Fantastic Four as a cross-over.

Spider-Man's first issue wasn't his first appearance, which is why this book is so far down the list compared to the #1 top spot, but it was the first appearance of a few other characters, including Chameleon and J Jonah Jameson. 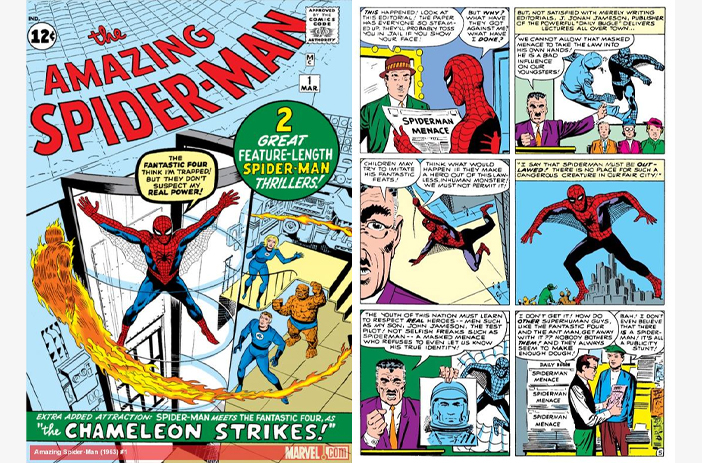 This book has yet to pass the $300k mark, but the pricing of comics is always in flux.

Be sure to double-check current values whenever you're interested in selling a comic, especially if it's something better than your average dollar bin dreck.

Another of the long line of heroes introduced in other long-running lines, this comic is the first introduction of a now-iconic hero played by a Hemsworth brother. That's right; it's the introduction of Thor!

Sure, Thor has been a folkloric figure for centuries, but his comic incarnation took on a life of his own despite the inspiration. 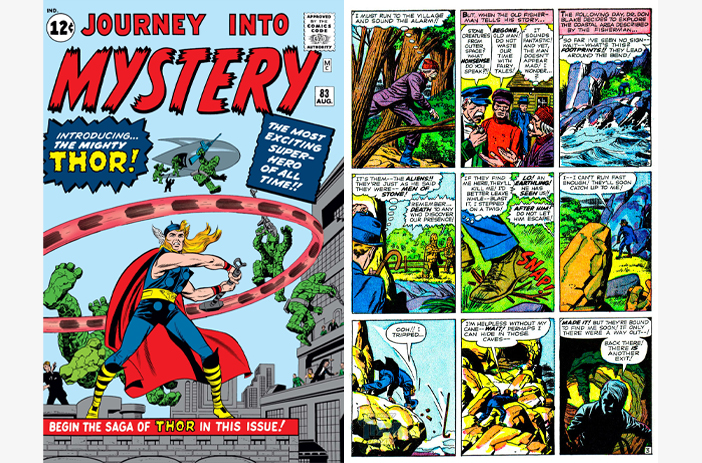 Few heroes were as different then to now as Thor. Thor used to have an alter ego, or rather, a false personality, instilled by Odin to teach him humility. My, how do these things change, right? While Thor has changed a lot over the years, the fact that key introduction issues don't change is a fact that has kept this issue valuable all the way to the present day.

This is another comic you can purchase for $2 directly from Marvel if you want to read the origins of the hero. Collectors, of course, are looking at a much higher price tag.

Team-ups are nothing new, but this was one of the first team-ups of the 60s. The heroes in the JLA included giants like Superman, Wonder Woman, Aquaman, the Flash, and Green Lantern, and while they had been popular throughout the golden age, it wasn't until the silver age that the Justice League got their own line of comics under their own name. 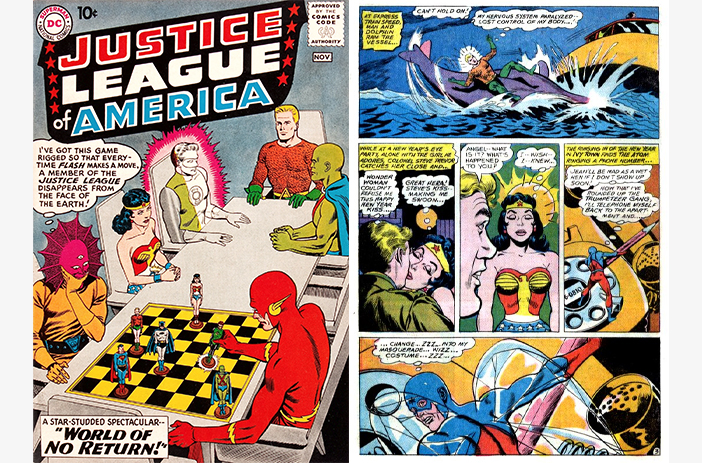 Justice League of America #1 is definitely a comic to keep an eye on. DC has been pushing its own cinematic universe, though its performance and popularity have yet to come close to touching the Avengers and the MCU. Still, the lead-up to another attempt at the Justice League (leaving the Snyder cut behind) could be in the cards, and you never know what that can do to a key issue like the first JLA book under its own title.

The original version of the Hulk was meant to be gray as a way to avoid referencing any real-world ethnicity and to keep skin colors out of the discussion entirely. However, quality control for the printing of the first issue was lacking, and variations in the ink throughout the pages led to varying shades of color for the Hulk himself.

Most importantly, some variation in ink led to the Hulk being green on some of those pages, and as it turned out, fans liked the green a lot more than they liked the gray. Stan Lee was never one to ignore the fans, so he responded by making green the canonical color for the Hulk starting in issue #2.

As the first real introduction of Green Hulk, issue #2 is another highly valuable silver-age comic. 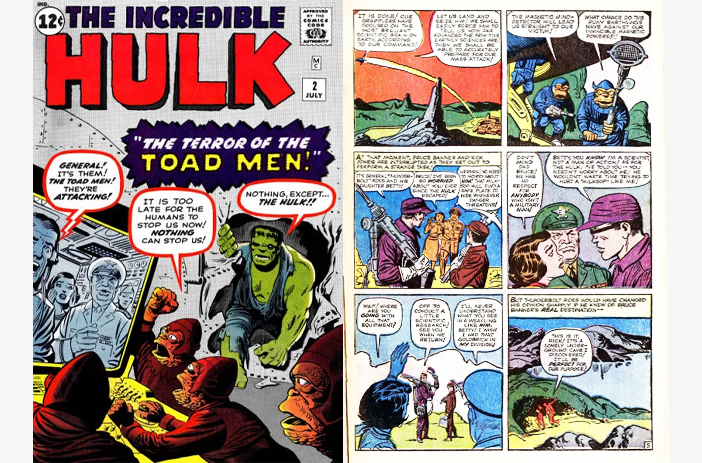 Of course, these issues are less valuable than the introduction key issues, though they can still be considered key in their own right. The typical high water mark for prices on Hulk #2 here is around $50,000.

Alright, sure; we've skipped a few valuable comics from the 60s to get here. Comics like Avengers #4 bringing Captain America back to life, Batman #121 as the first appearance of Mr. Freeze, and Fantastic Four #52 introducing Black Panther are all examples of valuable comics as well. The truth is, there are so many comics in the five and six-digit price ranges that it's impossible to list them all in one editorial article like this one.

If you have a bunch of silver age comics from the 1960s, there's a decent chance that you have something valuable on your hands. So, why not get them appraised? All you need to do is drop us a line and describe your collection (with a few pictures if you can), and we'll do our best to give you an idea of what you have on your hands. There's no obligation, and we won't pressure you into anything. We just love chatting comics!