/ Comic Resource Guides & Articles / Stan Lee Autograph: What It's Worth And What It's Sold For

Stan Lee Autograph: What It's Worth And What It's Sold For 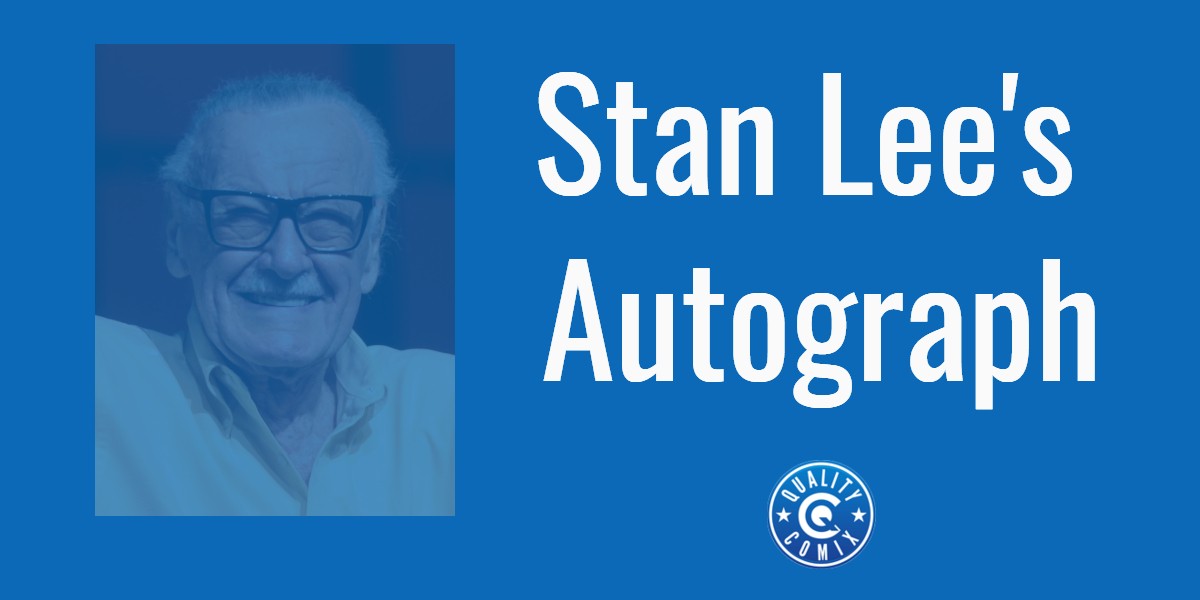 Stanley Martin Lieber, known to the world as Stan Lee, a.k.a Stan "The Man". “The Man” was, is and will continue to be a cultural icon. It's easy to see why his autograph is sought after. This is a man who didn't just help build but actually made the "bricks" that form the foundation of the mighty Marvel empire. After all of those years reading his letters pages while growing up. Planning your trip to whatever con he was attending. Getting to speak with him briefly as he personalized your cherished book. The feeling of accomplishment was almost indescribable! I mean, WOW! This was a comics god!

Sadly, Stan Lee parted ways with this world on November 12, 2018. He was 95 years old. There will be no more cons for his legions of fans to attend to get that most desired of autographs. No more new Stan Lee signatures exclaiming "Excelsior!" So how hard will it be to acquire a Stan Lee autograph now?

How Hard Is It To Find A Stan Lee Autograph?

The fact of the matter is it won't be very hard at all. The man loved people and people loved him and he would sign for hours. His ability to sit and sign autographs was legendary. He loved every minute he could sit and talk with the countless men, women and children that loved his creations and others. There are probably more Stan Lee signatures in the marketplace than any other single writer or artist in the industry. Keep in mind the man has been signing autographs since the late 60's!

What Is A Stan Lee Autograph Worth?

Inevitably the question is asked, "What is a Stan Lee autograph worth?"

To figure this out we have to look at a lot of different factors. How many Stan Lee signatures exist? A LOT. I mean really A LOT. Seriously. Usually so many of a thing lowers the value because there are more items than there are people desiring to own them. This is not the case with a Stan Lee autograph. EVERYBODY loves Stan Lee! But not everybody has a Stan Lee autograph. So there is some value right there. Next, what is Mr. Lee signing? A hotel napkin? Something like this could bring hundreds of dollars because of the personal and unusual nature of the item so let's look at the items most likely to be signed by Stan "The Man"...comic books!

Notice in the picture above a quick search of ebay revealed 4,494 items for sale bearing his signature. We are going to narrow our focus to items that have recently sold (indicated by the green cost text). There are still a great many recently sold autographs but one item stands out above the rest by it's sold value and the nature of the autograph. Peter Parker, known to the world as Spider-man, was told by his Uncle Ben, "With great power comes great responsibility..." This bit of wisdom defined Peter Parker as he fought crime from that moment on. Well, we all know it was Stan Lee's words to his greatest creation, the Amazing Spider-man. This item brought nearly $15,000!

Could this possibly be the most valuable Stan Lee autograph!? That’s a resounding, “No.”

The Most Valuable Stan Lee Autograph

Once more the conversation has to turn to the character most associated with the well respected Mr. Lee, everyone’s favorite wallcrawler, Spider-man. Spidey makes his “amazing” debut in Amazing Fantasy #15. This was the first issue that was titled “Amazing Fantasy”. Prior to this particular issue it was a sci-fi book featuring stories about aliens that were shapeshifters and turned themselves into television sets to invade our thinking or in the issue just before Spider-man’s introduction a young boy’s exposure to radiation causes him to develop powers. Come to think of it, that darned radiation was really up to no good in the 60s! Gamma radiation (The Incredible Hulk), cosmic radiation (The Fantastic Four) and of course the radioactive spider that landed on Peter Parker in Amazing Fantasy #15. The book that is probably the most valued with a Stan Lee signature. So let’s look at the percentage of value the book changes with or without an autograph from Stan the Man! 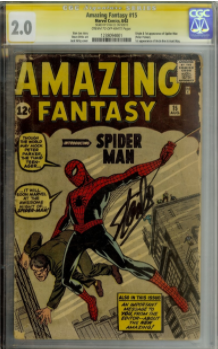 In March of 2019 an Amazing Fantasy #15 graded a 2.0 by CGC (widely recognized as the industry leader in graded comic certification) with no autograph sold for over $13,000. Just a couple of weeks later the same grade with a Stan Lee signature sold for over $18,000! Almost a 50% increase in value for the book containing the autograph. You could similarly compare another Lee creation such as Daredevil. In early 2020 a signed copy sold for $2,000 and an unsigned copy brought just over $800, both of which were graded 2.0 by CGC. In that scenario the book more than doubled in value due to the signature.

All of this information is impressive and maybe even helpful. It’s fair to say that whether it’s a “Number 1” of that series or any major first character appearance such as Journey into Mystery #83 (1st appearance of Thor) or Strange Tales #110 (1st appearance of Doctor Strange), if it has a Stan Lee signature on it it’s going to bring a premium. Of course it will because it’s a major historical comic book event coupled with the signature of one of the most influential minds in entertainment of the 20th century!

Take heart ye old collectors! Maybe you can’t afford a “major historical comic book event” or maybe you just don’t want to spend anywhere from a few hundred dollars to a few thousand to add a piece of history to your collection? Once again ebay rises to the occasion and provides a one-of-a-kind reprint for less than the cost of a Big Mac. Certainly one of Mr. Lee’s cultural milestones and not to be downplayed but you can own your very own “Stan Lee” meets the Simpsons reproduction photo signed by “The Man” himself for under a fiver!

By this last example an unbiased observer might assume that the autograph alone has no value. The issue with that assumption is there are too many factors to consider. When you search for an item you want on ebay and are then provided hundreds, if not thousands, of options then you can afford to be selective and you might get lucky and get a $3 autograph on an item with little value. What if that item were found as the only item in a rare book shop? Then your perception changes. You’ve just found an autographed piece of memorabilia in a place that is known for carrying rare things. Now maybe you would pay $25 or $50?

So get out there and find the one that's waiting for you!