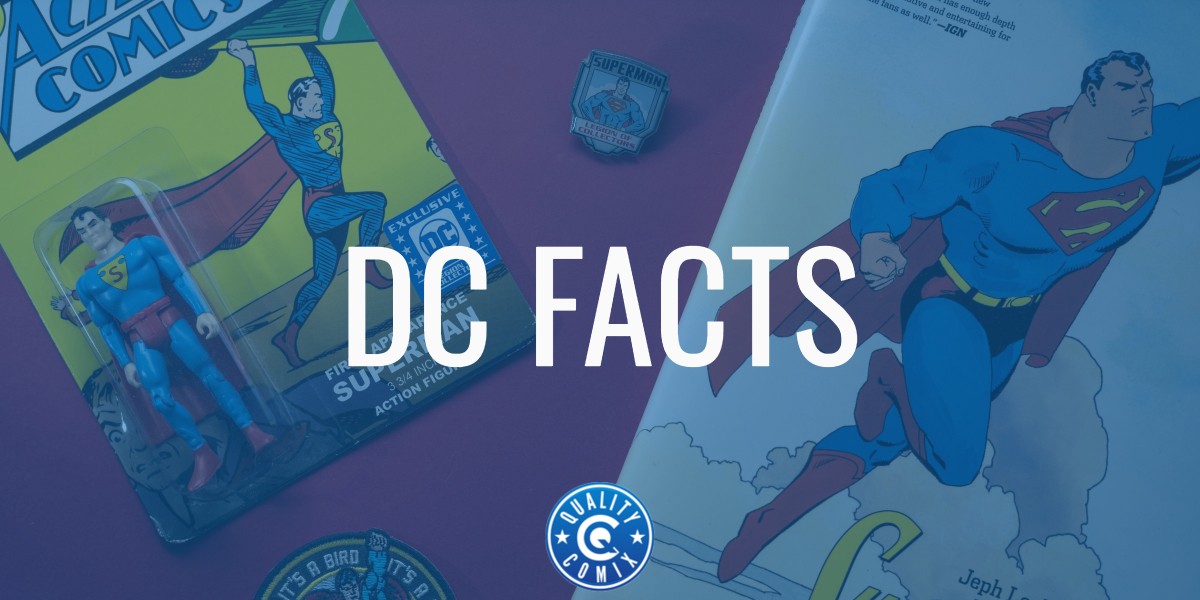 DC Comics is one of the largest comics publishers in the world, responsible for some of the most iconic superheroes we know and love. Today, we bring you 20 interesting facts about DC comics you never knew until now…

Did you know that DC almost sold the rights to Superman, Wonder Woman, Green Lantern, Batman - and many other members of the Justice League? When struggling for money in 1984, the comic franchise actually offered this to the big wigs at Marvel, but it was rejected! Can you imagine if it actually went through?

A lot of people are unaware of this, but Superman wasn’t a DC Comics original superhero. He was created by Jerry Siegel and Joe Shuster, and DC bought the rights to him in 1938. Unfortunately, this turned out to be the worst decision the two cartoonists ever made!

The Joker is the most iconic supervillain throughout comic book history. For decades, we lived believing there was one Joker for every Batman. However, a revelation in a recent Justice League comic told us there were actually three incarnations of the Joker.

The legendary Stan Lee is synonymous with Marvel, but did you know he spent a brief period working for DC? He joined them in the 90s after leaving Marvel, producing his own unique run of comics called Just Imagine. Fans of both DC and Marvel can admit how strange it feels to know that Mr. Marvel himself worked for the company’s biggest rival!

It’s as weird as it sounds. During the Silver Age of comics, Superman seemed to develop some of the strangest and least helpful powers of any superhero. The creme de la creme was his ability to fire out mini Supermen from his hands. Why? We do not know…

Another fact for the Man of Steel fans out there. Remember the original creators of Superman we mentioned earlier? They designed the character without the ability to fly. Instead, he could leap really high into the air, before the people at DC decided that flight was an ability he simply needed to have.

#7 Alan Moore had regrets over Batgirl

The Killing Joke is one of the most iconic graphic novels ever created, largely thanks to how dark it is. One of the main parts of the book sees Barbara Gordon (Batgirl) shot and left paraplegic. Alan Moore, the creator of the story, later admitted that he had regrets over this plotline and felt like he went too far.

A key element of Batman’s character is that he never kills his enemies - how kind! Unfortunately, it’s a big fat myth. He has killed before, mainly in the earlier publications of DC Comics, when the brand wasn’t as kid-friendly as it is now.

The 19th publication of Sandman by Neil Gaiman won the World Fantasy Award for Best Short Story in 1975. It was rare for a comic to win this - so rare, in fact, that they changed the rules after this to stop it from ever happening again!

Lex Luthor is a key villain in the DC Comics universe, known by many for his striking bald look. However, he originally debuted with a head of ginger hair. It was an artists’ error that saw him drawn bald, and Superman’s co-creator liked it so much they ran with it!

When you think of Batman, you instantly conjure up an image of the Dark Knight in your brain. But, he originally looked more like Robin, sporting a red leotard with a black cape. He also had blonde hair, before he was finally changed into the iconic design we know today.

Who changed Batman’s look? Bill Finger was the man responsible for this, and for writing many of his early stories. Bob Kane (who many credited as the creator of Batman) regularly denied this…until Finger passed away. It wasn’t until 2014 that he was finally given credit.

In another brutal arc in the Batman saga, Jason Todd was beaten and left to die by (you guessed it) the Joker. However, his fate was still in the balance, and DC Comics actually ran a telephone poll to see what the fans wanted. In a stunning turn of events, 5,343 voted yes, and 5,271 voted no. So the fans killed off young Robin!

#14 Well…one fan may have killed Robin

The drama doesn’t end there! It was revealed that one fan may have dialed and voted Yes 100 times during the poll, meaning they could very well be the sole reason Jason Todd died during that arc, crazy!

Spider-Man fans may know of Spider-Pig, but in DC there was genuinely a Bat-Cow. It was rescued and adopted by Batman and Robin, becoming a member of their team.

The superhero Vibe was an interesting one introduced by DC, mainly because his superpower depended on him breakdancing. Yes, it’s as bizarre as it sounds, which is why he was killed off and later revived without this gimmick.

#17 Shazam used to be Captain Marvel

Shazam is a very popular DC hero, but he was originally called Captain Marvel. DC had to change the name after Marvel placed a copyright for their own Captain Marvel. Hence, we only have Shazam in DC now!

DC toyed with this idea in the 70s but had to kill it when a fan wrote in and pitched the same idea. Ironically, they couldn’t pursue it without giving the fan credit, so they gave up and these two lovebirds never became an item.

#19 The Flash built an apartment in minutes

This speedster’s abilities are always some of the most interesting in the comic world. In one storyline, the Flash is so fast he rescues people from a burning building, then reconstructs the same building in a matter of minutes - now that’s fast!

#20 The Flash is the joint-fastest man alive

In multiple comics from different generations, Superman and the Flash have raced to see who is faster. Every single time, it ends in a tie. So, the Flash isn’t technically the fastest man alive as he has to share this title with Clark Kent.

Which of these DC Comics facts was your favorite, and do you have any others that didn’t make the list? Feel free to comment below and start a conversation!