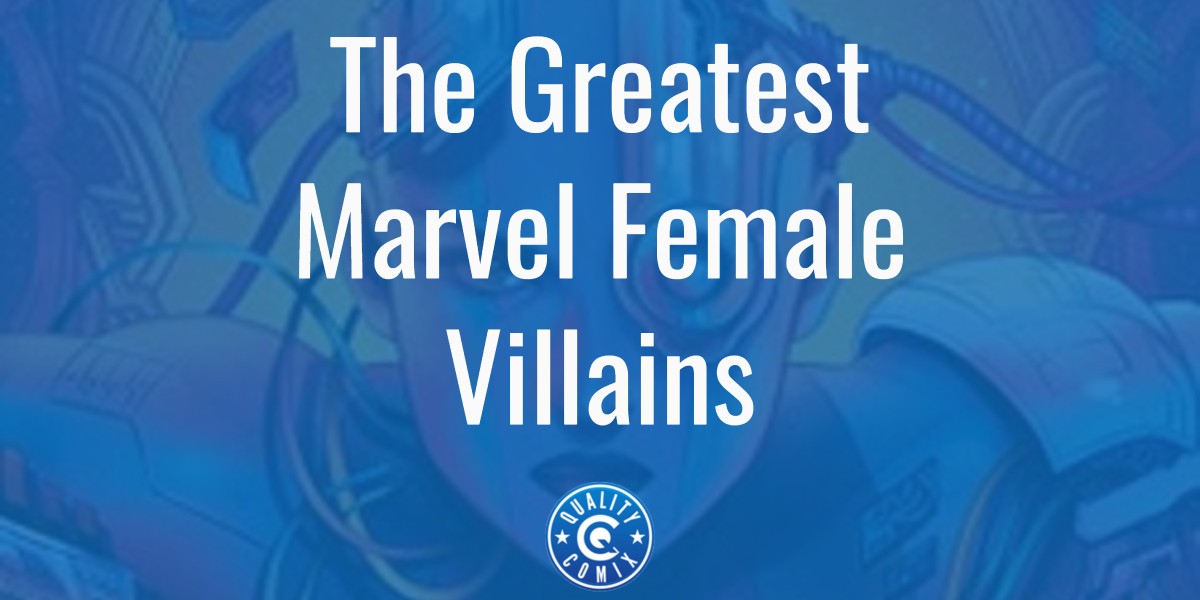 Marvel has enthralled us with gripping stories about a wide array of characters in the past. The rule was simple: the more complex the characters are, the more intriguing and interesting the reading experience.

In any story, the villains are the spices that enhance the story’s plot and make us fall into a love-hate relationship. The experience gets even more captivating when the villains are females.

Let us now dive into the most alluring and impressive female villains the Marvel Universe has ever created for us.

Enchantress’s real name is Amora. She is a seductive sorceress who can lure any man with her beauty and manipulative mind. She uses her skills to learn from men their secrets, and pick up magic tricks. She was born in Asgard and has a sister, Lorelei. She started learning magic from Karnilla, The Queen of Norns. Karnilla banished Amora as Amora was not disciplined. That didn’t deter Amora from learning magic or becoming the most powerful sorceress. She has many powers such as telepathy, mind-control, levitation, and teleportation and is known to give Thor a tough time.

Bombshell, as her name suggests, is very attractive. Nevertheless, she does not employ her beauty to seduce men, as Enchantress does. She is good at juggling and is an expert in the usage of explosives. Her real name is Wendy Conrad. She was hired by Crossfire, along with Oddball and the Silencer to kidnap Hawkeye and Mockingbird. She played a key role in the mission, which was a success. Oddball liked Bombshell's skill as a juggler and wanted her to join The Death-Rows, a team of criminal jugglers. She soon joined, which later helped her when she was defeated by Hawkeye and Mockingbird, and was about to be arrested.

Anaconda is a female supervillain who is pitted against Captain America. She has arms that are made of the fictional element Adamantium, and these arms can grow to any length she wishes. While her limbs lengthen and expand, they look and act like snakes, justifying her name ‘Anaconda’. Her original name is Blanche Sitznski. She uses her expanding limbs to crush and choke her enemies. She has been given gills through surgery that help her to breathe underwater. She is an associate of the Serpent Society and is an adept streetfighter and an excellent swimmer. She has superhuman strength and high durability.

Tanya Sealy, gets her name from one of the most poisonous and deadly snakes—Black Mamba. She is as lethal as her name suggests. She was initially recruited by Roxxon Oil Company alongside Anaconda, Death Adder, and Sidewinder to steal the Serpent Crown. The Roxxon Oil Company performed a brain implant on Black Mamba, giving her supernatural abilities. She can read the minds of people around her and can create images in the minds of people which would render them confused. She uses this skill against her opponents to disarm them. She is capable of producing an energetic power cloud that would suck in her victims and annihilate them.

Typhoid Mary is a supervillain with a split personality disorder. Her real name is Mary Walker. As Mary, she is a pacifist who is timid and quiet. As Typhoid Mary, she is brutal, risk-taking, and lustful. As ‘Bloody Mary’, she is merciless, sadistic, and misandrist. She has superpowers like telekinesis and pyrokinesis, making her highly dangerous. She is an adept athlete, an excellent martial artist, and a skilled swordsman. Her physical condition is top-notch and she has great agility and reflexes. To some extent, she can control the mind of others, by implanting suggestive ideas in their minds. She has enhanced strength and possesses the mutant Zero armor. Her arsenal contains bladed weapons and she is Kingpin’s favorite pick when it comes to assassins.

Hela is a female supervillain who fights Thor frequently. She is an Asgardian and the Goddess of Death. She has superhuman strength, stamina, and durability. She knows Black magic, can talk to the dead, and can summon any soul from hell. She has crushed Thor’s hammer, killing hundreds of warriors in hand-to-hand combat.  She is also the first wielder of Mjolnir, defeating the Valkyries. Channeling energy through hands, manifesting weapons out of her body, are some of her primary strengths.

Dark Phoenix, whose real name is Jean ElaineGrey, is the second daughter of John Grey and Elaine Grey. She has an elder sister, Sara Grey-Bailey. Her superpowers, such as telekinesis and telepathy, manifested in her, when she happened to witness her friend getting hit by a car and dying. She is capable of matter manipulation on an atomic level and teleportation. She is also gifted with immortality. Cyclops is her husband and she has a romantic attraction towards Wolverine. She is also capable of experiencing others' emotions and manipulating their emotions as well.

Emma Forest, also known as The White Queen, is one of the hero-turned Female Supervillains brought to us by Marvel. One of her most important capabilities is having advanced telepathic powers with which she can read others’ minds, implant suggestions, and wipe away memories. There are numerous occasions where this beautiful Supervillain has displayed phenomenal powers. Once she shielded her entire team from telepathic connection. She did so by cloaking her teammates' minds and rearranging their thought patterns. Another time, she overpowered professor X who is considered to be a level 9 Telepath. Emma proved herself to be a level 10 Telepath by walking through his memories. The X-Men are probably lucky to have her as an ally.

Lady Deathstrike is the archenemy of Wolverine. She has a skeleton made of the fictional metal Adamantium, making her bones unbreakable. She is a superb athlete and a master in hand-to-hand combat. She is gifted with superhuman strength, speed, agility, and reflexes. She excels in a variety of Asian Martial Arts. Her wounds heal faster than any others. She has retractable claw nails, each of them being 12 inches long. These claws can cut through any substance except things made out of Adamantium and Captain America’s Shield. Yuriko Oyama is her Japanese name. Lord Dark Wind is her father and Lord Deathstrike is her sister.

Raven Darkholme, popularly known as Mystique, is a Female Supervillain with a blue body, red hair, and yellow eyes. She is a mutant, whose primary superpower is to take the form of any animal or person. Not just the shape, she can also mimic the voice to accurate precision. On top of that, she can also create inanimate objects used by the person she appears to be. She never gets old as her body cells keep mutating. She is said to be more than a hundred years old. Such a long age gives her the advantage of being an experienced soul with a very youthful body. She is the mother of Nightcrawler, Graydon Creed, and Rogue. Out of them, Rogue is adopted.

Tilda Johnson is the human alter-ego of Nightshade. Dr.Nightshade and Deadly Nightshade are her other names. Her main superpower is her intelligence. She is a self-taught individual. Biochemistry, robotics, genetics, cybernetics, and physics are some of her favorite subjects. She wears protective battle armor along with silver spikes. She has an array of advanced weaponry and humanoid robots at her disposal. She is capable of using concentrated pheromones and her attractiveness to control men. She possesses a chemical serum that can turn men into werewolves. Her body can secrete chemical pheromones that control animals, especially werewolves. She is an archenemy of the Avengers.

Nebula is a Luphomoid and has been gifted with superhuman strength, agility, and durability. As a space pirate and mercenary, she squeezed control of Sanctuary II, a spaceship, previously under the control of Thanos. She is a master assassin and a pro in hand-to-hand combat. She is a weapons specialist who can deliver energy blasts through wrist blasters. She is an expert in tactics and her body is capable of regeneration. Her body can be enhanced bionically. Thanos, once boasting that Nebula was his greatest creation, is one of the few gems on her crown.

The list of best Female Supervillains has been listed without any proper order.

Would you be interested in listing the villains from least powerful to most powerful, least evil to most evil?

Do you think of any other female supervillain that must be added to this list?

We would love to know your comments and feedback.