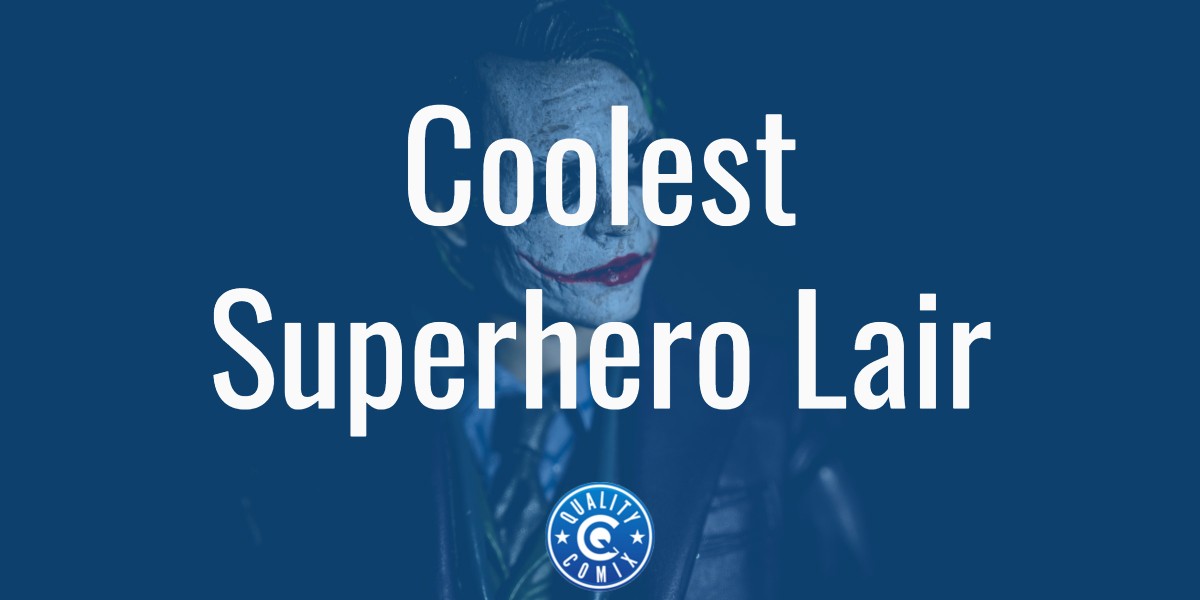 Both Marvel and DC have a fantastic lineup of iconic villains to keep their heroes on their toes. Of course, all villains need a hideout to plot their next big move. So we’ve compiled a list of the top 10 coolest lairs of all time, counting down to the best one of all…

One of Spider-Man’s arch enemies, the Green Goblin is known for its abundance of technology and cool gadgets. The not-so-secret identity of the Goblin is, of course, Norman Osborne. If you’re new to comic-book lore, I’m sorry for ruining that for you! Regardless, he’s a millionaire with lots of money to spare, meaning his lair is one of the most extravagant out there. There are secret rooms throughout the Goblin House, along with loads of different gadgets and luxury furnishings. It’s basically a mansion that’s designed for evil doings - you don’t get much cooler than that.

Switching over to DC, Lex Luthor is known as the main antagonist for Superman. LexCorp Tower is the tallest building in Metropolis, so this supervillain isn’t one for laying low. The tower itself is actually home to a legitimate business, which Luthor uses to generate funds for his ongoing science experiments and projects - all of which take place in hidden rooms throughout the building. However, the key reason this is a cool lair is that Luthor has lined the entire tower - including the windows - with lead. This means Superman can’t see into it with his x-ray vision. Bravo Lex, bravo.

The Penguin is another DC villain that has a great deal of money thanks to a legitimate business. He runs everything out of the Iceberg Lounge, which is a hot-spot in Gotham City for socialites. Of course, hidden inside the lounge is a criminal enterprise with lots of dodgy things going on. Again, there’s something to admire about the whole ‘hiding in plain sight’ thing that many of these villains go for.

Justice League fans may know the Hall of Justice is the headquarters of this group of superheroes. Well, the Hall of Doom is the opposite of this, serving as the evil lair for the Injustice League. It’s located in Slaughter Swamp, which is about as good a location as you can think of for a supervillain’s lair. Back in the day, it also served as the base for the Legion of Doom, where the entire lair could burrow underground and be hidden from view.

Mephisto is an extra-dimensional demon that rose to prominence throughout many series of Marvel comics. He deserves a mention as there is a lot of hype around him potentially entering the Marvel Cinematic Universe. Mephisto has one of the coolest lairs out there, with his Realm existing as one of the many death dimensions in the Marvel comic universe. It is basically hell, filled with pits of fire and loads of other demons - can you get more evil than this?

We’d bump this further up the list if it was just one single lair, but the Joker has had multiple hideouts in his time. Each time he decides to kick back and do some evil plotting, his lair will follow a similar theme. It’s usually located in an abandoned circus or amusement park, with lots of creepy clown decorations and general horror tropes. Needless to say, wherever he calls home will always have a very scary edge to it.

Castle Doom is home to Victor Von Doom, arguably one of the most intriguing villains in the Marvel universe. He is the ruler of the country Latveria, so it only makes sense that he should base himself in a 16th Century castle. Housed deep within its walls is one of the most advanced labs the world has ever seen. Dr. Doom is free to conduct all the experiments he wants with almost impenetrable walls and Doombots patrolling the outside to ensure he’s never interrupted. Add to this that the castle is way up on a mountain, and it’s pretty much impossible for heroes to breach.

A bit of a niche lair to begin the top three, but definitely one of the coolest around. Mr. Sinister is a mutant created by Apocalypse, and his lair replicated 19th century London. He created it himself after stealing the power of the Dreaming Celestial, using the energy to develop clones of himself. So he built this city to keep everyone in, and he even has a ban on women being there. It’s one of the strangest and coolest lairs you’ll ever see.

Not the greatest of names, but Ship is a lair that will definitely raise your eyebrows. It’s the headquarters of Apocalypse, created by the Celestials. Effectively, it’s a ship with a life of its own, full of alien technology. It can cloak itself to become invisible, and it has one of the most advanced AI systems in the Marvel universe.

Finally, we have the coolest superhero lair of all. Honestly, does it get much cooler than basing your headquarters on a flipping asteroid?! This is what Magneto chose to do, and we kind of admire him for it. The leader of the Brotherhood of Evil Mutants has figured out the perfect base where nobody can find him. If anyone tries to come at him in space, he can just flick their ships away as he controls the magnetic field of energy. There are loads of hidden buildings on the asteroid, making it as close to a natural Death Star as you can get.

There you have it, Asteroid M takes the crown for the coolest supervillain lair. Do you agree or disagree? If there are any lairs that didn’t make the cut, feel free to pitch them below.