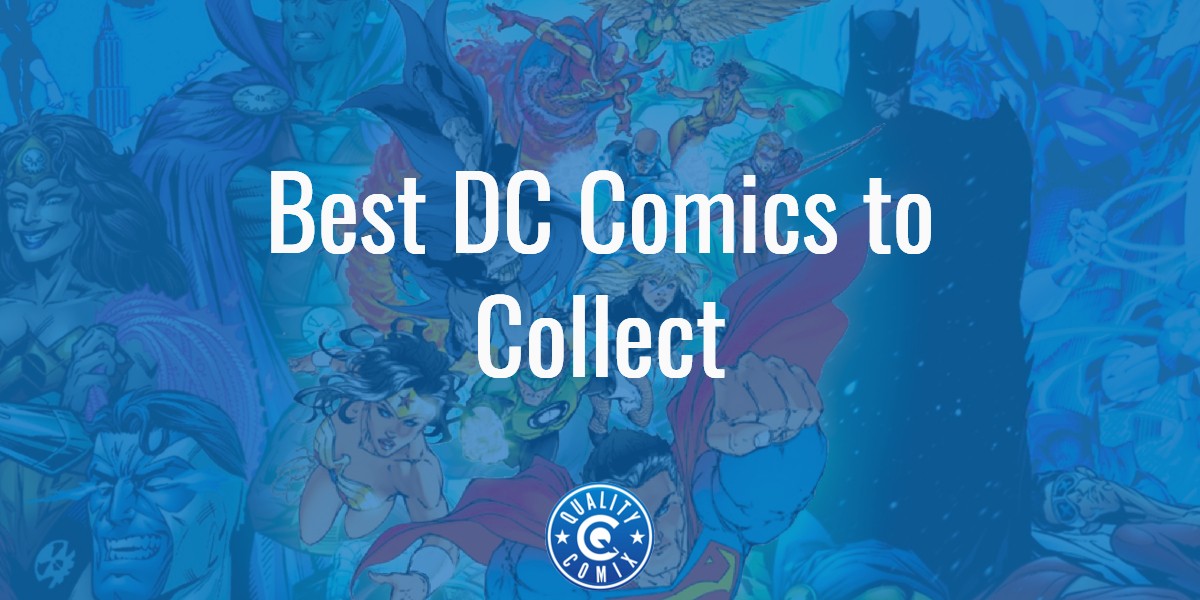 DC Comics has been putting out great comics since the 1930s, and there are plenty of them to choose from if you want to start your own collection.

If you're looking to add some new titles, whether that’s for investment or to make some extra pocket money, or just to enjoy the exciting adventures of DC’s popular heroes, then check out our list of the best DC comics to collect.

From iconic superheroes like Superman and Batman, to newer characters like Harley Quinn and Aquaman, there's something for everyone in DC Comics, but the comics on our list of collectibles are valuable titles from the 50s and 60s. 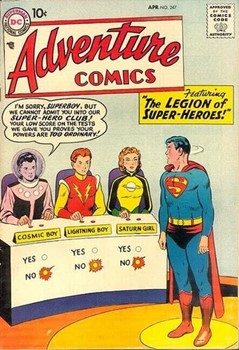 The issue tells three stories featuring Superboy, Green Arrow and Aquaman. This comic series is one of the most famous and longest-running comics ever released, with over 470 issues.

It was written by Otto Binder, Ed Herron and Jack Miller; pencil and ink by Al Plastino, George Papp and Ramona Fradon, and edited by Whitney Ellsworth.

Superboy: "The Legion of Super-Heroes"

A group of superheroes find Clark Kent and identify him as Superboy. Taking him to the 30th century aboard their time sphere, Superboy is then put through an initiation for membership into the Legion, which rejects him. But only as an act, because they had already decided to have Clark join them.

The attorney executing J.J. Brandon’s estate gives Green Arrow 13 arrows, shaped as objects of superstition. He tells the hero that Brandon’s desire was to give Green Arrow’s charity of choice the amount of $5 million if he can defeat bad luck on Friday the 13th by using those arrows. Green Arrow finds out that it was all a scheme so the attorney could keep some money and the hero captures him.

A nuclear device intended to explode in outer space has fallen into the ocean, and Aquaman has only three hours to get it to Pierce Island for disarming before it explodes and destroys all sea life with radioactive contamination. Using his finny friends to get past the obstacles, Aquaman conveys the device to its destination just under the deadline.

Find out more about this and other issues of Adventure Comics here. 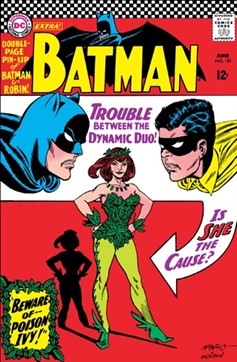 It was written by Robert Kanigher and Gardner Fox; penciled by Sheldon Moldoff, inking by Joe Giella and Sid Greene, and lettering by Gaspar Saladino. It was edited by Julius Schwartz.

While attending an art show, Bruce Wayne and Dick Grayson witness the arrival of Poison Ivy, who wants to be the number 1 female criminal in the city. Batman follows her but she gets away, and because of the way Batman talks about Ivy, Robin fears he might be in love with her.

After they face off again, Ivy uses her poison to charm Batman, but he manages to snap out of it and arrest her.

When Kaye Daye, member of the Mystery Analysts of Gotham City is to receive a Sherlock Award for her latest book "The Stars Do Kill", the Mystery Analysts soon become involved in a mysterious attempt on Kaye's life. However, Batman with the help of the others manage to foil this plot and save Kaye before her cousin's hired thugs can murder her and she could cash in on the family inheritance.

For more information about this and other issues of Batman, click here. 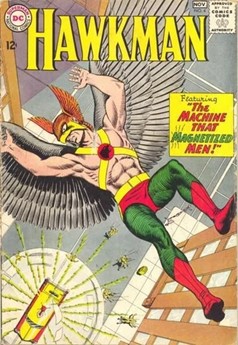 This issue marks the first appearance of Zatanna as a supporting character in the Hawkman comics. "The Girl Who Split in Two!" was the first chapter in "Zatanna's Search" for her father.

It was written by Gardner Fox; penciled and inked by Murphy Anderson, with lettering by Gaspar Saladino. It was edited by Julius Schwartz.

Two items suddenly appear in a museum, so Hawkman and Hawkgirl go to investigate in China and Ireland. After fighting criminals in each country, they each find one girl speaking gibberish. By joining them, they merged into a woman called Zatanna, the daughter of Zatara, the great magician.

Hawkman and Hawkgirl offer to use the Absorbascon to try and learn the location of Zatara, however they find nothing. This leads Zatanna to believe that her father is dead, however Hawkman suggests that may not be so, and that he may just have amnesia.

With renewed sense of purpose, Zatanna teleports away, thanking Hawkman and Hawkgirl for their assistance. 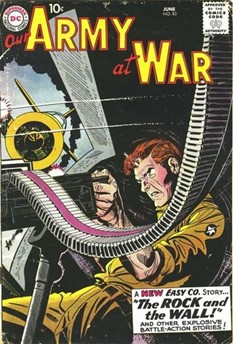 This issue marks the first appearance of Joe Wall in the comics. It features three stories of the army and their heroic adventures.

It was written and edited by Robert Kanigher, with pencil and ink by Joe Kubert.

Sgt. Rock meets Joe Wall, who is nicknamed "The Wall”, a braggart who boasts about his superior skill. When the two board a damaged aircraft to operate its side guns, The Wall uses it as an opportunity to try and compete with the Rock. However, Rock's modesty in combat, and his self-sacrifice, helping The Wall fire his gun when he's wounded, shows to Joe Wall that the Rock is a superior soldier.

A Consolidated XB-41 Liberator gunner gives his testimony on being the gunner, taking care of a machine gun nicknamed “Baby” by the crew. He was always tasked with ensuring that Baby remained in good condition.

During a dogfight, their gunship took damage and was landed. The gunner ensured that Baby was in good condition, to which the crew responded that he was the most important “baby” on the plane.

An 8.0 book of Our Army at War Vol #83 is the highest rated copy sold at auction, at a price of $16,730 in August 2015. That’s the only recorded price for that issue; it was previously sold once before but at the same value.

View our price guide page for Our Army at War for more information. 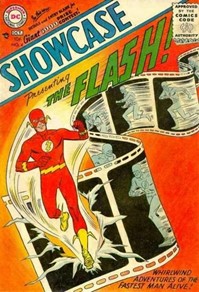 Issue #4 of Showcase Vol. 1 is called “Mystery of the Human Thunderbolt!”. It has a cover date of October 1956.

This issue marks the first appearance of Barry Allen, better known as The Flash, which later grew into his own comic series. This issue also presents his origin story.

It was written by Robert Kanigher, with pencil by Carmine Infantino and ink by Joe Kubert, with lettering from Gaspar Saladino. It was edited by Julius Schwartz.

Mystery of the Human Thunderbolt!

Barry Allen is a police scientist who is doused with chemicals that were previously struck by lightning. He finds out he’s been endowed with super-speed and creates a costume which contracts and hides in his ring. He takes on the name of The Flash. In his first mission, Barry goes after the criminal known as the Turtle Man, the world's slowest man. The Turtle Man tries to rob a bank, but he is ultimately thwarted by the Flash, despite the fact that his super-speed often worked against him going after the plodding Turtle Man. Ultimately, the Flash captures his opponent and arrests him.

The Man Who Broke the Time Barrier!

Barry Allen becomes The Flash after a series of robberies hit Central City. He faces Mazdan, a criminal from the future who was supposed to be sent to the 50th century to serve his sentence on a desolate Earth, but was sent to the past by mistake. Mazdan escapes, but Barry catches him again but stops when Mazdan petitions the Flash to allow him to return to his own time. Instead of allowing him to go in his own time capsule, the Flash instead breaks the time barrier by running at super speed, turning Mazdan over to the authorities in the future. He goes back to his time and resumes his life.

Find out more in our price guide here. 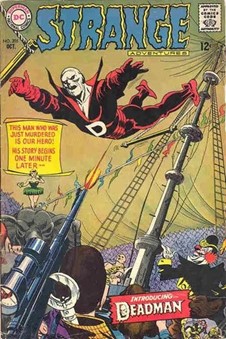 This issue marks the first appearance of Deadman (Boston Brand), who later appeared in some Batman comics and his own series.

It was written by Arnold Drake, with pencil by Carmine Infantino and ink by George Roussos. It was edited by Jack Miller.

Deadman: "Who Has Been Lying in My Grave?"

After circus acrobat Boston Brand is killed by a hook-handed sniper with a high-powered rifle during his performance, his ghost remains earthbound. Rama Kushna, the spirit of the universe, tells Deadman that he will have the power to walk among men until he finds his murderer. Deadman soon finds that he has the power to enter and control living people's bodies. Taking over the body of Tiny, the circus strongman, he breaks up a dope-smuggling racket and then begins his search for his killer.

"War of the Mind Readers"

Alien ships from Uranus approach Earth to destroy it. One of the aliens descends to earth to face Merle Mallory - who previously had discovered that a well-dressed man was a florist by feeling a rose thorn in his hand, seeing the polem in his hat and a flower petal between his money - and ordered him to tell the leaders to surrender, if not, they would destroy earth. After this, the leaders decided not to surrender, but to attack, and Merle Mallory discovers that the Uranian was lying and they were going to use fake ships to deprive earth from their atomic bombs.

For more information about this and other issues of Strange Adventures, visit our price guide.

If you’re looking for the best DC comics to collect, you won’t go far wrong with these high value issues, but DC has a vast library of books and characters to choose from.

Older comics in good condition tend to have a higher value, as well as the first issue of a new comic and the first comic with a new character.

If you’re new to collecting comic books and not sure where to start, check out our article full of comic book collecting tips.