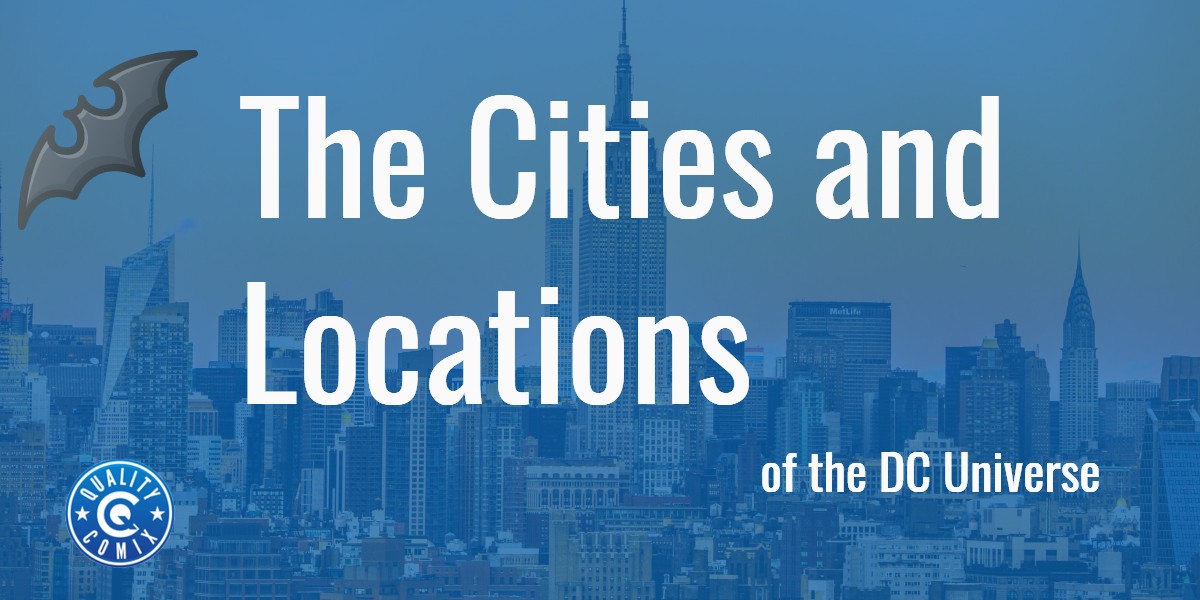 If you are a DC comics fan, you will love our Ultimate guide to locations and cities in the DC Universe.

We have covered almost everything you could ever want to know here.

So, dive in and enjoy.

Cities of the DC Universe

When we talk about the cities of the DC Universe, we usually only talk about 2. Those are Gotham and, of course, Metropolis.

Many other cities exist within the Universe, and these consist of both fictional and existing ones. Let's take a look at the imaginary cities that exist.

The hideout of the Justice League and former home of Lucas Carr. Located in Rhode Island.

Keystone City is located across the river from Central City in Kansas.

Nanda Parbat is a mystical city that has appeared in more than one DC Comics publication and often appears as Deadman's hideout.

The hometown of the second Atom, Ray Palmer. Located in Massachusetts.

The home of Robby Reed, which is located in Colorado.

The city where Miguel Devante, the "new Son of Vulcan," stays.

The Martian Manhunter's former home is located in Colorado.

Liberty Hill is a suburb of Washington, DC. It's the hometown of the third Tattooed Man.

Where the Titan Red Star resides is located in Russia.

David Zavimbe was first introduced as the Batwing resides in Tinasha in the Democratic Republic of Congo.

where the Question originated as well as the first Blue Beetle is in Southern Illinois.

The city where the Golden Age Atom lives was located in Pennsylvania.

The Resurrection Man briefly stayed in the city of Crucible. Located in Georgia, on Interstate 285.

A hidden city of bird-people. The home of Northwind. Located in Greenland (destroyed).

The fictional hometown of Superman. Located in Kansas.

The home of Starman.

The home of Hal Jordan, the Green Lantern. Located in California.

The city where the Justice Society of America is based.

The location of the former home of Captain Comet

This ancient city is home to Homo magi, a magical race of humans, and is located in Turkey.

The home of the Hawk and the Dove. Located in Oregon.

A part of San Diego submerged off the coast of California.

The city in DC Comics where Doctor Mid-Nite resides. Located in Washington.

A small town rescued by the Teen Titans from Mister Twister on their very first adventure.

The city of Supergirl's headquarters.

The hometown of the second Flash (Barry Allen). It is alternatively stated to be in Ohio, Illinois, or Florida.

Little Boy Blue hailed from the town of Radiance in the 1940s. This location is in Pennsylvania.

Green Arrow's home. The location has changed over time.

Hawkman and Hawkwoman's former home is located in Detroit, Michigan. It was previously located Chicago, Illinois.

The home of Superman and featured in many DC COMICS stories.

The home of Batman and a fictional city in New Jersey, USA.

Texas is home to the second El Diablo.

Home of Wonder Woman, the first Mister Terrific and the Spectre. Located in California.

The home of Supergirl. Located in Southern California.

A hidden city in which super-intelligent gorillas live in a city called Gorilla City. Solovar and Gorilla Grodd can be found at this location. It is located in Africa.

A fictional version of the Doom Patrol by Rachel Pollack is set in Violet Valley.

Located in the heart of the city is Justice Society of America's former headquarters. This location can be found in the state of Pennsylvania.

'Amnesty Bay' is the place where Aquaman and his father Tom Curry live on the surface. It is situated in the state of Maine.

Based in Florida, a partially submerged city was used as Aquaman's base of operations.

The fictional home of Aztek has been generally interpreted as Oregon.

So, there you have it.

Our complete list of the cities and locations in the DC Universe.