/ Comic Resource Guides & Articles / Thor Vs Thanos: Who Would Win and Who is the Strongest?

Thor Vs Thanos: Who Would Win and Who is the Strongest? 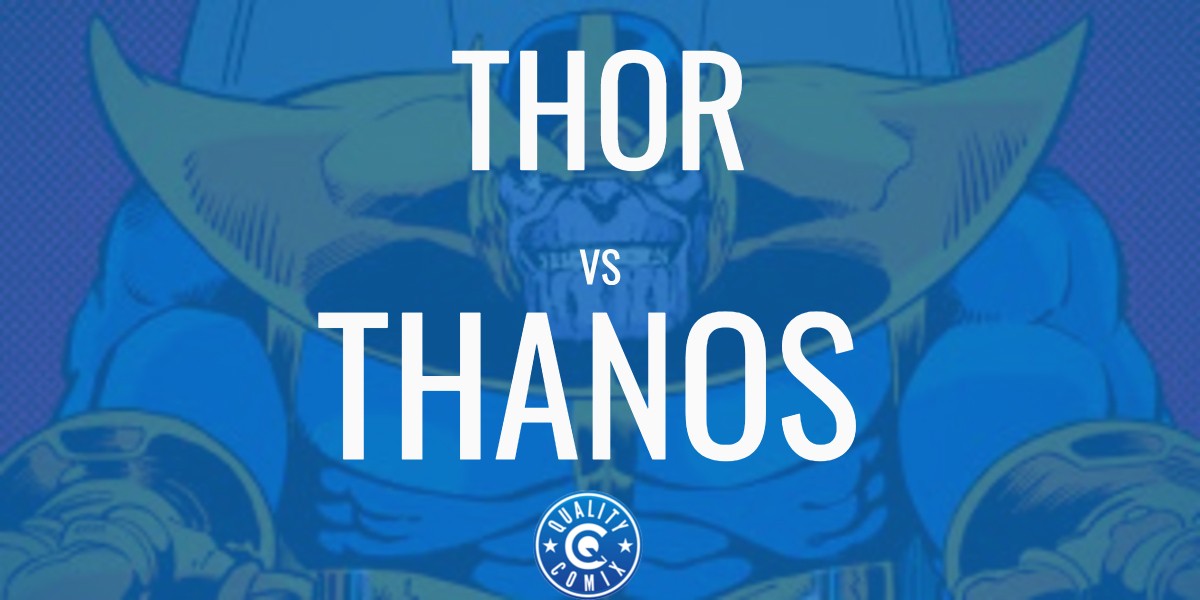 Thor vs Thanos: Who Would Really Win? This article explores the idea of who is more powerful between the two and who would really win in a one-on-one fight. We explore their strengths, weaknesses, and their weapons to see who will come out on top.

Thor Odinson is the Asgardian God of Thunder and one of the strongest Avengers. The character was created by Jack Kirby, Stan Lee, and Larry Lieber, based on the Norse deity of the same name. He was introduced to the Marvel fans in August 1962, through the comic - Journey Into Mystery, issue #83. In the Marvel Cinematic Universe, the character is portrayed by Chris Hemsworth.

Thor is the most powerful Asgardian in the Nine Realms, second only to his father, Odin. His main strength lies in his ability to control lightning and use it as a potent weapon. However, this unique capability can also be seen as a weakness as Thor gets weaker after every usage of his godly powers. He has an array of other abilities on his belt, including superhuman strength, durability, speed, and reflexes.

Thanos is a powerful villain in the Marvel universe and the primary antagonist in Avengers: Infinity War. The character was created by Jim Starlin and made his first appearance in the comic - The Invincible Iron Man, issue #55. In the Marvel Cinematic Universe, the character is portrayed by Josh Brolin.

Thanos is a half-Eternal, half-Deviant being who was once an alien warlord in the moon Titan. After clashing with some of the most famous superheroes in the Marvel world, he started to seek balance in the universe and began collecting all six Infinity Stones to wipe out half of the universe's population.

What are Thor's Powers?

Thor can control lightning energy and use it as a weapon. He has the ability to change the weather and summon the lightning as per his will.

Mjölnir, or his iconic hammer, is his main weapon which he wields with one hand. When Thor throws it at an enemy, they are electrocuted and knocked out. Since Mjölnir can only be wielded by a true and worthy owner, very few can lift it besides Thor.

He is a trained Asgardian fighter, an accomplished combatant, and one of the most physically strongest people in the Nine Realms.

What are Thanos' Powers?

Thanos has a wide range of powers, including manipulation of time, telekinesis, telepathy, superhuman stamina, and extreme tolerance to physical damage. Thanos can also generate energy blasts and channel cosmic energy as a weapon. Being trained in the art of war on Titan, he is also an accomplished hand-to-hand combatant. After he managed to collect all the Infinity Stones, he turned into one of the most powerful beings in the Marvel Universe.

Who is Stronger: Thor or Thanos?

When it comes to brute strength and power, Thanos seems to be the clear winner. He is able to destroy an entire planet easily and was even capable of standing the electrical shockwave that emanates after snapping his fingers with the Infinity Gauntlet on. Thanos also has no apparent weaknesses, which make him very extremely deadly to the opponents.

On the other hand, Thor has plenty of strengths that can be used to overcome Thanos’ extraordinary powers. For example, the Asgardian is quite resourceful when it comes to fighting other gods and beings who have similar powers like his. Thor is also known to use clever strategies throughout the comics and movies, which helped him win many battles against enemies stronger than him. Thor also exhibits a will that is stronger than most beings. He never gives up even when Thanos had beaten him before and with the full awareness that he could die if he comes face to face with him again.

Thor uses a wide range of skills when fighting an enemy. Some strategies include:

Using Mjölnir to summon lightning and striking his enemies out.
Placing Mjölnir on top of an enemy to prevent him from standing up.
Hand-to-hand combat

First of all, Thanos is extremely smart. He uses a wide range of strategies along with his intelligence to defeat his opponents. He often manipulates people and plants traps for them to fall into.

Thanos often uses very simple attacks such as punches and kicks to take down his enemies. Unlike Thor, Thanos doesn't have any special fighting techniques other than illusions and intimidation.

Thanos has god-like powers, which means he is definitely more powerful than any person on Earth and a good part of the galaxy. However, he is not a god. This was probably why Thor was not given a chance to defeat Thanos in the movie. The only exception being when Thanos was tired and damaged, and Thor was able to cut his head off.

Thor vs. Thanos: Battles in The Comics

Their first encounter was in Avengers (1963), issue #125 when Earth’s mightiest heroes first heard of Thanos. On this occasion, Thanos lured the team to a fight with his followers instead of going for a direct confrontation.

Thanos sought to bring all the Infinity Stones together in Avengers Annual (1967), issue #7. Thor and his teammates try to stop him, failing in the process.

Thanos resurfaced in Thor (1998), issues #20 to #25, with a new plan to kill the universe's population. It took Thor some upgraded armour and weapons to prevail over Thanos, who apparently perished at the end of the series. But in Infinity Abyss (2001), it was revealed that this was a Thanosi, a simple Thanos clone.

In Infinity (2013), the Avengers were busy saving the universe, and Thanos took this opportunity to attack the Earth. Thor and the team were able to return just in time in Infinity #6, but they were tired after fighting the Builders. The God of Thunder called upon the lightning to strike Thanos, but it had no effect. Earth was only after Thanos’ son - Thane was manipulated to put an end to this.

Thanos VS Thor: Who Will Win?

The winner of this fight would be Thanos based on his superior brute strength, and raw powers. However, if Thor uses some clever strategies, he could defeat the villain, especially since he has access to more powerful weapons and techniques.

What do you think?