/ Comic Resource Guides & Articles / Hulk Vs Doomsday: Who Would Win?

Hulk Vs Doomsday: Who Would Win? 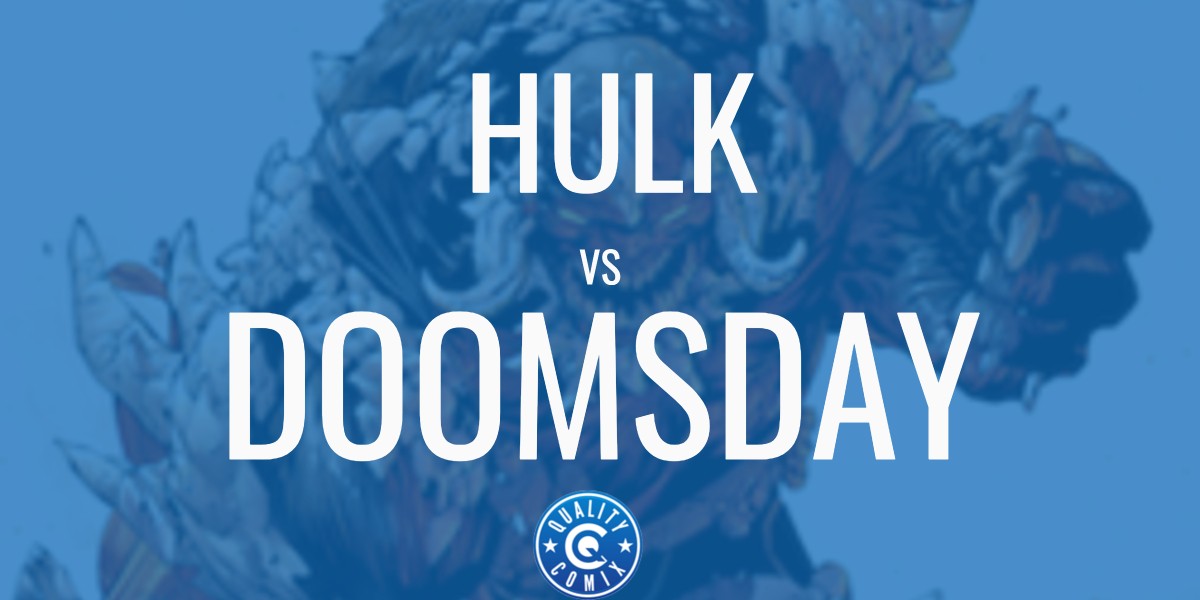 Who is stronger, the Hulk or Doomsday? - A question that has been debated and in vogue for quite some time now. One faction of the population might argue that the Hulk is stronger simply because he can take down almost anyone with a single punch, while another would vote for Doomsday because he killed the mighty Superman.

But how do we decide this battle without being biased towards either of them? Let's take a look at some facts and come to a conclusion.

The Hulk was created by Stan Lee and Jack Kirby. He first appeared in The Incredible Hulk, issue #1, in 1962. The Hulk is a massive green monster whose human alter-ego is Bruce Banner. Banner transforms into the powerful Hulk when he gets mad. While Banner is an extremely intelligent being, it is tough for him to control his emotions when he gets angry.

Doomsday is a super-villain in the DC Universe that was created by Dan Jurgens. Doomsday debuted through a brief cameo in Superman: The Man of Steel, issue #17 in 1992. This was followed by a full appearance in issue #18. Doomsday has the unique distinction of being one of the rare few who has managed to kill Superman and has also fought Batman, Wonder Woman, and Superboy (the clone of Superman).

Doomsday's first appearance was in Superman: The Man of Steel, issue #17 in 1992. This was followed by a full appearance in issue #18.

What Are Hulk’s Powers?

Hulk has superhuman strength and is super-strong enough to go toe-to-toe with mighty beings like Thanos and the Thing. He's also capable of surviving in space and is immune to all earthly diseases and weapons. Some Marvel enthusiasts claim that the Hulk's strength is directly proportional to his anger levels; the angrier he gets, the stronger he becomes.

What Are Doomsday’s Powers?

Doomsday is known for his incredible strength, speed, stamina, invulnerability(the ability to not get wounded, injured, or harmed), physical revival (the ability to reform his body after it's been destroyed), regeneration (the ability to heal himself when he is hurt). He is also known for developing novel weapons to fight his new enemies, such as metallic armour.

Who Is Physically Stronger?

Doomsday possesses inexhaustible stamina, being able to fight Superman for a whole day without breaking a sweat. However, in all his fights, the Hulk seems to get tired after a while.

Fighting Techniques of The Hulk

The Hulk is super strong and often uses his strength to smash objects like cars and trees in an attempt to attack his opponent. He is able to leap long distances due to the superhuman strength of his legs and can even land on his head without being injured.

When fighting an enemy, Doomsday will try and beat them by using brute strength. Most of the time, he uses his fists and feet. However, he usually uses anything that he finds in the battle scene to hit his opponent. In fact, Doomsday is so strong that he does not need any weapons to defeat his enemies. His strength alone is enough to take out anybody and anything that stands in his way.

Who Would Win The Fight?

Doomsday would win this fight any day because he’s smarter than the Hulk. Bruce Banner may be more intelligent than Doomsday, but when he transforms into the Hulk, all his intelligence is converted to brute animal-like power.

Though both Doomsday and the Hulk have healing abilities, Doomsday heals much faster.

In terms of brute strength, the Hulk has a slight edge. However, his biggest negative is he gets tired. On the other hand, Doomsday is able to fight for hours without getting tired.

It would be a very long fight since the Hulk is incredibly hard to kill, thanks to his super-tough skin. But, in the end, Doomsday would be the winner due to his never-ending strength and endurance.

However, if this was World Breaker Hulk, that might be a different issue.