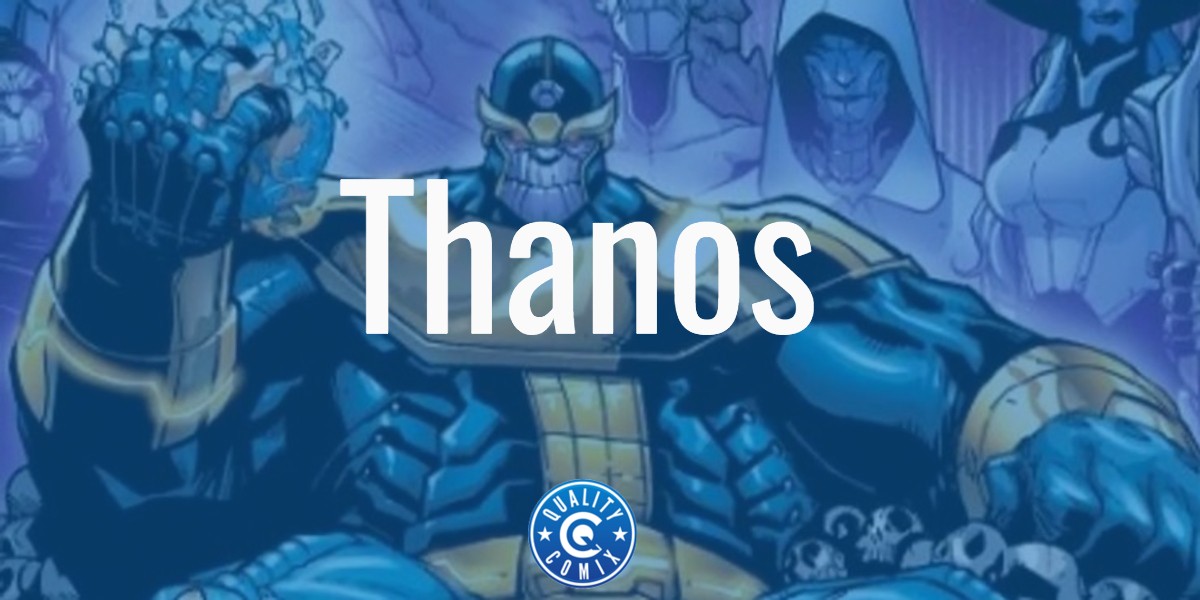 Thanos is one of the most iconic Marvel villains. He's a cosmic tyrant with an insatiable hunger for power. He seeks to take over every planet in the universe and destroy all that oppose him.

And these are just some of our favourite quotes from Thanos himself. They come from both films and comics, so many you might have never seen or read before.

The Best Thanos Quotes of All Time

“Your fate will lay heavily on my heart, though by all rights it shouldn’t. I did not force you to fight me. I gave you the chance to surrender the Gem. You forced me into doing what I did. I had to be faithful to my nature. For, after all, I am Thanos.”

“The only matter I do not take seriously, boy, is you. Your politics bore me. Your demeanor is that of a pouty child. And apparently, you alienated my favorite daughter, Gamora. I shall honor our agreement, Kree, if you bring me the Orb. But return to me again empty handed... And I will bathe the starways in your blood.”

“With all six Stones, I could simply snap my fingers. They would all cease to exist. I call that... mercy.”

“Dread it. Run from it. Destiny still arrives. Or should I say, I have.”

“I only ask that you take this matter seriously.”

“I finally rest, and watch the sunrise on a grateful universe. The hardest choices require the strongest wills.”

“You’re strong. But I could snap my fingers, and you’d all cease to exist.”

“You’re a great fighter, Gamora. Come. Let me help you.”

“I ignored my destiny once, I can not do that again. Even for you. I’m sorry Little one.”

“In my heart, I knew you still cared. But one ever knows for sure. Reality is often disappointing”.

“I used the stones to destroy the stones. It nearly… killed me. But the work is done. it always will be.”

“When I’m done, half of humanity will still exist. Perfectly balanced, as all things should be. I hope they remember you.”

“Your optimism is misplaced, Asgardian”.

“You should have gone for the head”.

“I take it that Maw is dead? This day extracts a heavy toll. Still, he accomplished his mission.”

“I am Thanos of Titan. I have conquered worlds. I have bent reality around my will. Men cower at the mere mention of my name. And now… now you have imprisoned me… mocked me… disrespected me. And here you stand, ready to take advantage to my condition. Ready to finish me. Well, if I am to fall, I will die showing you all that Thanos will not be disrespected. Thanos is still a conqueror. Thanos is still a warrior. Thanos is still a god. And you will either bow or be broken!”

"No resurrections this time."

"I will shred this universe down to it’s last atom and then, with the stones you’ve collected for me, create a new one. It is not what is lost but only what it is been given… a grateful universe."

“At random. Dispassionate, fair. The rich and poor alike. And they called me a madman. And what I predicted, came to pass.”

“You couldn’t live with your own failure. Where did that bring you, back to me”?

“You’re quite the fighter, Gamora. Come. Let me help you.”

"Ah... thank you, daughter. Perhaps I treated you too harshly…"

"You're not the only one cursed with knowledge."

“Look. Pretty, isn’t it? Perfectly balanced. As all things should be.”

"In all my years of conquest, violence, slaughter, it was never personal. But I’ll tell you now, what I’m about to do to your stubborn, annoying little planet… I’m gonna enjoy it. Very, very much."

“I did not ask for your trust. I demand only your obedience.”

"Little one, it’s a simple calculus. This universe is finite, its resources, finite… if life is left unchecked, life will cease to exist. It needs correction."

“You have my respect, Stark. When I’m done, half of humanity will still be alive. I hope they remember you.”

“Strength and energy are the same despite its title or claim, Asgardian. Your supposed heavenly status impresses Thanos of Titan not in the least.”

“I know what it’s like to lose. To feel so desperately that you’re right, yet to fail nonetheless. It’s frightening, turns the legs to jelly. I ask you to what end? Dread it. Run from it. Destiny arrives all the same. And now it’s here. Or should I say, I am.”

"Reality can be whatever I want."

“Destiny arrives all the same.”

“When I’m done, half of humanity will still be alive.”

. “You were going to bed hungry, scrounging for scraps. Your planet was on the brink of collapse. I’m the one who stopped that. You know what’s happened since then? The children born have known nothing but full bellies and clear skies. It’s a paradise.”

“Undying? You should choose your words more carefully.”

"Destiny waits for no man. Not even one who shall bring the universe to its knees."

“Fun isn’t something one considers when balancing the universe. But this… does put a smile on my face.”

"The Tesseract… or your brother’s head. I assume you have a preference?"

“I thought that by eliminating half of life, the other half would thrive. But you have shown me… that’s impossible. As long as there are those that remember what was, there will always be those, that are unable to accept what can be. They will resist..”

“What care I for the fate of three souls… when the entire universe is mine to control?!”

Fine I’ll do it myself.

“For I am transformed! I have left the mortal plane behind me! In truth I have risen above the mantle of godhood! Even celestial status is now below me! The Infinity Gems have given me the power of Supreme Being!”

“We all think that at first. We are all wrong.”

“Death is with me every second of the day! My every moment is spent in either dealing out death or worshipping it! So tell me, who under the stars is better suited than I to be Death’s consort? ―

“You’re strong. Me… You’re generous. Me… But I never taught you to lie. That’s why you’re so bad at it. Where is the Soul Stone?” –

“Science and a benevolent nature have allowed thousands of different species to flourish beyond the capability of their environs to sustain them.”

“Behind each door waits further myriad treasures. The bounty is as diverse as the stars within the heavens. But the gilded goal I seek is the most precious of all. Further enlightenment.”

“There are many actors in this grand drama, and I, Thanos, appear to be the only participant with a full grasp on the situation.”

"They’re not trying to stop something I’m going to do in our time. They’re trying to undo something I’ve already done in theirs."

So, there you have it, our huge list of Thanos quotes.

Do you have a favourite?

The mad Titan is by far one of the best villains of all time. And his quotes are firmly a part of cinematic and literary history.