/ Comic Resource Guides & Articles / The Joker Evolution: How This Iconic Character Developed over the Years

The Joker Evolution: How This Iconic Character Developed over the Years 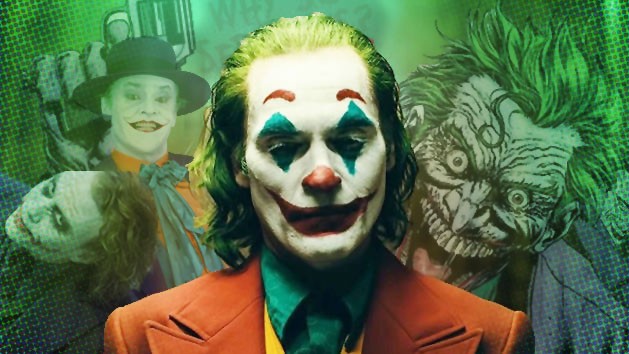 This well-known comic book villain has been around for decades, so it’s unsurprising that he’s changed over the years. Let’s explore the Joker evolution.

For every hero, there’s a villain. Since 1940, the world has come to know the Joker — the villain they love to hate.

You may know him by his distinctive pale white face, wide-mouth grin, and green hair. The Joker is one of the oldest, most recognized supervillains — not only in comic book history but in American popular culture.

In his nearly eighty years of existence, the character of the Joker has been portrayed in many different ways. Through many movies, TV shows, and comic book appearances, the Joker has undoubtedly become a darker, more violent character, while keeping the same general psychotic appearance and demeanor.

So how has the Joker changed over time? We examine appearances in comic books, movies, and TV shows to explore the Joker’s evolution and how he became a more complex, compelling character over the years.

If you're looking to buy comics, check out our new arrivals today. 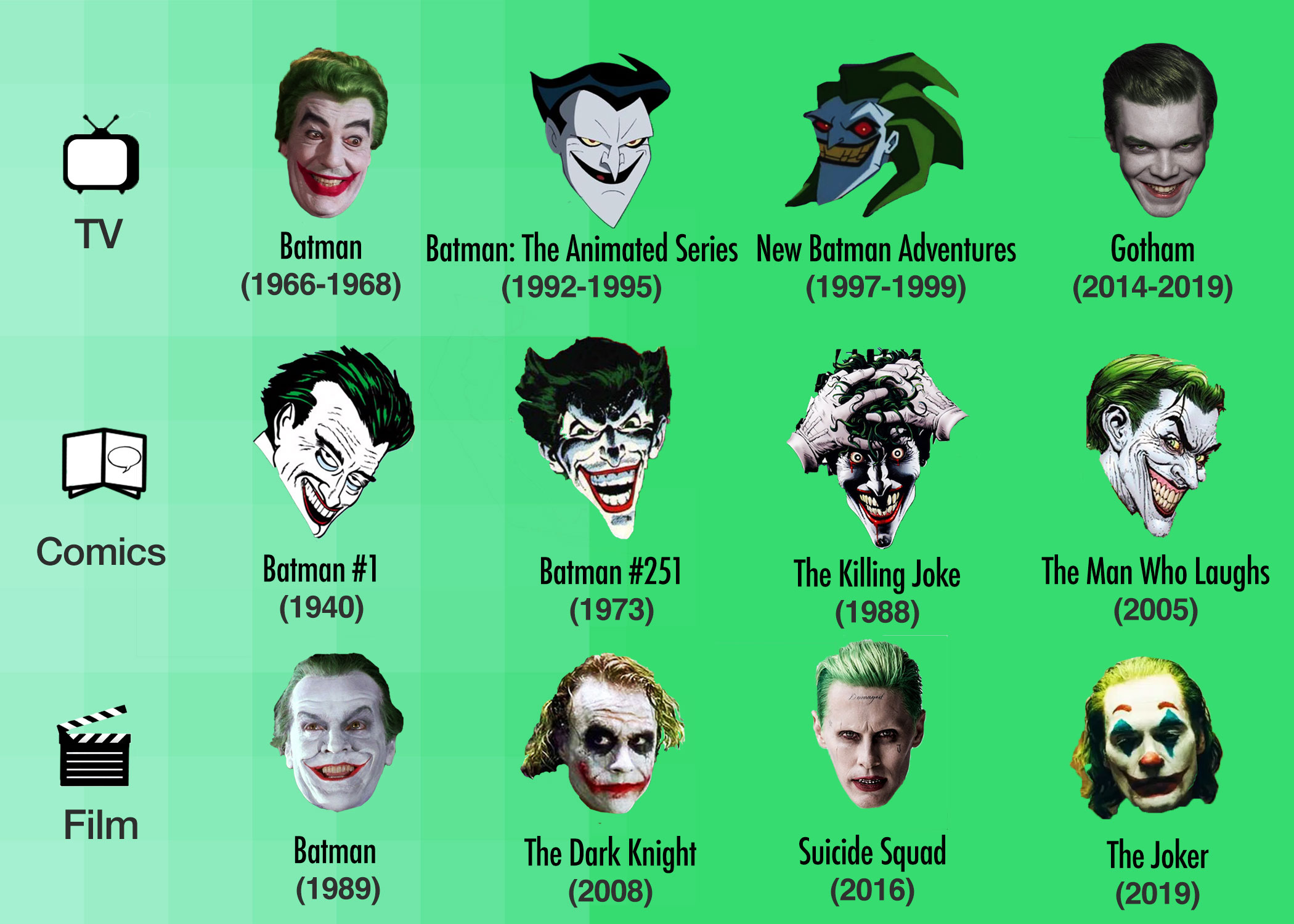 To help us summarize the Joker's notable appearances throughout the years, we had Allen Stewart, Founder of Hall of Heroes weigh in.

When the Joker character first appeared in Batman #1, he was portrayed as a maniacal sociopath who would murder characters seemingly for the sake of entertainment. However, later in the 1940s, the Joker evolved from a homicidal maniac into a goofy, trickster-thief. 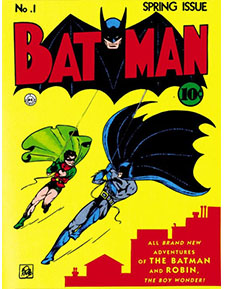 Crudely-drawn compared to today's artistry, the Joker nonetheless springs into the Golden Age almost fully-formed—menacing toothy grin, deviously clever eyes, white face, active eyebrows, green hair, jolly purple suit. He leaves his victims with smiles on their faces after their deaths; something that has become a trademark for the character.

Allen Stewart: Batman’s arch-nemesis has been around almost as long as The Dark Knight himself. The Joker first appeared in Batman Comics #1 April 1940 less than a year after Batman first appeared in Detective Comics #27 May 1939. The Joker was originally supposed to have been killed off in his first appearance but was spared at the last minute by then DC Comics editor Whitney Ellsworth. In his initial appearance, The Joker was a murderous thieving psychopath dressed as a Joker playing card. He would then go unto to appear in dozens of Batman stories throughout the Golden Age Era of comics to become Batman’s arch-nemesis. 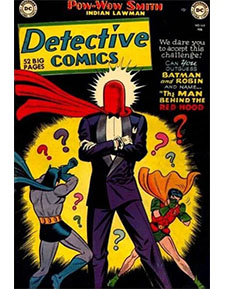 As he evolved, the Joker acquired other signatures—elongated face, hook nose, maniacal laughter, and a flair for chaos. We learn the origin of the Joker in this issue. "Red Hood" becomes the Joker when chemicals dyed his skin in the vat he escaped through, which drastically changes his appearance to the familiar evil clown face we've come to know.

Allen Stewart: The Joker’s origin was not revealed until nearly a decade later in Detective Comics #168 1951. It was revealed that he was a thief known as The Red Hood who encountered Batman in a chemical factory and fell into a vat of acid that bleached his skin white and turned his hair green driving him insane.

At the dawn of the Silver Age, The Joker turned from a maniacal killer to more of a goofy prankster. This was an effect of the Comics Code Authority Censorship Board launched in 1954 in response to public concern over violent and gory content.

Allen Stewart: "In 1954 due to Dr. Frederick Wertham’s book “Seduction of the Innocent” and the Comics Code Authority. The Joker was then reduced from a homicidal murdering clown to a thieving trickster. He was portrayed this way in both the comics and his first live appearance in the 1966-68 Batman television series by Cesar Romero. The version of The Joker would last nearly 20 years." 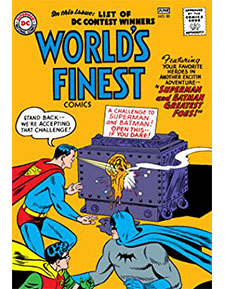 This Joker looks hastily drawn as if even ink can't contain him. His grin dimples his cheeks so much that it almost looks like a pencil mustache. The Joker and Lex Luthor team up to start a manufacturing company, creating nearly indestructible robots. 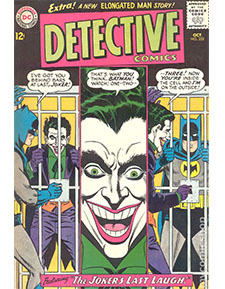 Leaping forward in lush coloration and detail, the Joker acquired bright green eyes to match his hair, bottomless pits of insanity and mirth. The Joker returns, committing robberies by telling bad jokes. Surprisingly, he gets people to laugh, then robs them using a gimmick based on the joke.

Related: GPANalysis: Is it worth the cost?

The Joker during the Bronze Age of comics was revived in 1975. His character during this time closely aligned back to the origins of a maniac and killer. With the Comics Code Authority Censorship still in effect, each bronze appearance of the Joker ultimately ended with him being apprehended. Because of this, the comic books became too predictable, and many lost interest in continuing to follow the series. 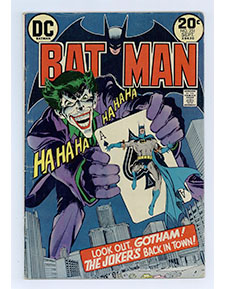 This dangerous Joker sports an impossibly pointed chin and a saucy updo in his green hair. The Joker has set himself free from the Mental Hospital and comes after Batman yet again. But first, he kills everyone in his previous gang that ratted him out to the police.

Allen Stewart: In 1973 Batman #251 the story “The Jokers Five-Way Revenge” by Denny O’Neil and Neal Adams brought the character of The Joker back to his original homicidal tendencies. 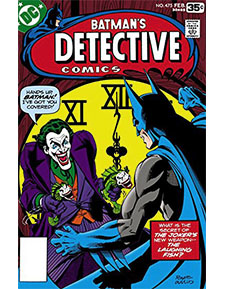 Dudded out in purple like a Chicagoland gangster, this tall, lanky fedora-wearing incarnation struts through every room like he owns the joint. Batman responds to scream by the docks and finds fisherman upset about their catch... a fish with the Jokers face. He kills Carl G. Francis when he refuses to comply with his fish arrangements.

During the Modern Age, The Joker was featured comic book issues that helped solidify his character. He is just maniac as ever, perhaps even more so than in the Bronze Age or Golden Age. 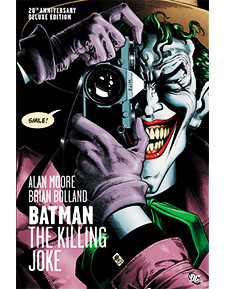 There's nothing funny about the dark madness of this beady-eyed Joker, darkly shaded and foaming at the mouth through a grin that seems to bleed. This issue is famous for The Joker notoriously crippling Barbara Gordon and ending her crime-fighting career as Batgirl. He kidnaps her and shoots her through the spine, leaving her paraplegic. 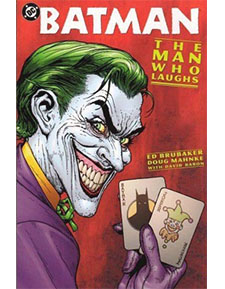 His grin peeled back to reveal the gums, this gritty Joker looks like more skull than man—definitely no one you want to run into in an alley. In this issue, The Joker is back to his killing ways, taking down citizens of Gotham City, leaving his signature calling card every time: leaving a smile on the victims' faces. 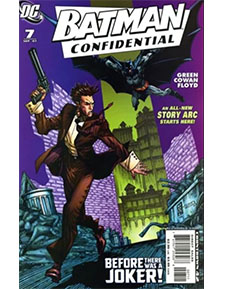 Even grimmer and skeletal, green hair unkempt, his giant grin a result of "Glasgow smile" facial wounds, this Joker is the stuff of nightmares. Jack (aka, "The Joker"), takes Bruce Wayne's girlfriend Lorna hostage. 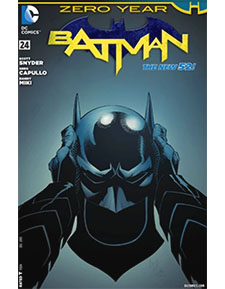 More shark than human, this Joker brings back the elongated chin but adds dead eyes, an enormous toothy mouth, and enough craggy wrinkles to draw a map of Hell. Batman is on the trail of the Red Hood Gang and their mysterious leader.

The Joker has been portrayed in nine different movies, spanning from 1966 to the newest movie in 2019. The evolution of the Joker is apparent when you compare the earliest movie depiction to the latest. 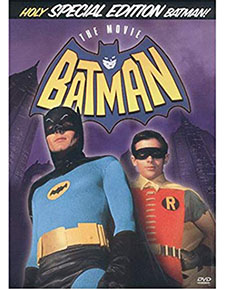 Before anyone had heard of a "comic book movie," Romero brought his wily TV interpretation of the Joker to the big screen. He was silly, but "committed." 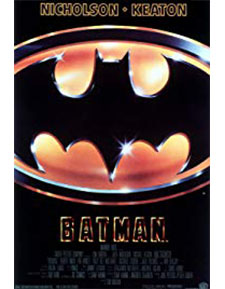 Jack Nicholson added menace to a high-camp, high-concept Joker. His already-sinister grin is enhanced with prosthetics, remaining upturned even during his murderous outbursts. 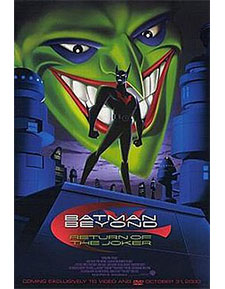 Hamill brought the Joker into the future with sharp angles and a tight green coif like a helmet. He didn't update his wardrobe—purple suits and string ties will still be chic in 2040, apparently. 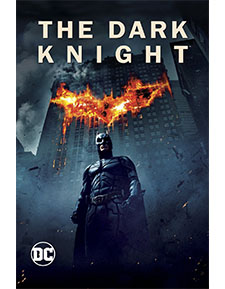 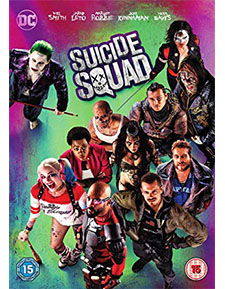 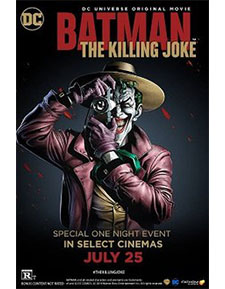 With Hamill at the mic again, this animated film follows the "serious" Batman trend with stylized realism: the Clown Prince has beady eyes, emo hair, and a Bronze-era elongated face. 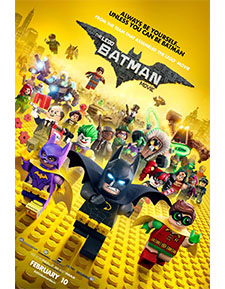 ... and then the Joker was an animated Lego. Voiced by Zack Galifianakis, this is easily the silliest, campiest Joker. 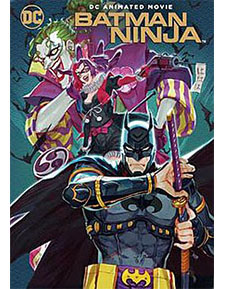 This Japanese animated film gave the Joker anime details, from purple bushido robes to wormy green hair with a mind of its own. 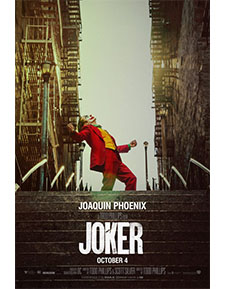 A wounded animal turned dangerous, Joaquin Phoenix plays the Joker as a victim of abuse who learns to laugh at his trauma (and at his psychopathic killing rages). In the final scenes, he borrows the purple suit from his rent-a-clown job and adds, in a first for the character, a red nose, and blue diamond eyes. The eyes, combined with the stringy green mop, recall The Crow—fitting since it's easy to feel like this Joker's equally-nasty victims had it coming. 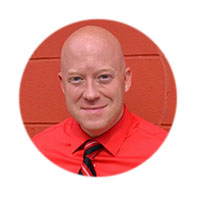 Don Shanahan: The Joker, in nearly every incarnation, is about gall and unpredictability. The randomness of the wanton violence of the character's bold and impudent actions is what makes him a threat beyond all other villains in Batman's Rogue's Gallery and maybe all of comics. For me, Phoenix's interpretation of the character is about spinning a yarn of delusion that dances around with hints and jokes, while being pressed for an explanation of how he came to be. He floats through Phillips' film as an unreliable narrator, more so than any actor's take before him, even Ledger and his facial scar story variations. The mystery level is high while still having that unforgettable cackle to laugh at his situations with maniacal zeal. 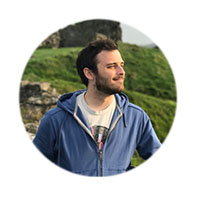 Stephen Miller: If Heath Ledger’s Joker was an agent of chaos, and Jared Leto's one of vapid, nihilistic excess, what makes Joaquin Phoenix's turn so compelling is that, for the bulk of the film, he's barely an agent at all. The man, Arthur Fleck, makes vile choices to be sure: an hour in, we've already seen him dance with a loaded gun in a children's hospital and murder three businessmen on a metro train. But the symbol, The Joker — the sloppy clown getup, the shrieking laugh, the contradicting histories, the publicized chaos — where does all that come from? A job he's fired from, an affliction he's born with, competing memories of a delusional mother, psychological projections of an outraged underclass. His arc is that of a blown-up balloon animal, larger-than-life and hollow, and he only means what Gotham (we) twist him into meaning. He's a villain designed for our era of irony, waltzing toward one numb, preordained punchline. When he finally gets on that soundstage and chooses to pull the trigger, it's not meant to change anything about society or his station, just to announce to the world that he's in on the joke.

Related: Discover the most influential comic books in pop culture

The evolution of the Joker can’t be properly explored without mention of TV — the Joker has appeared in many Batman television shows over the years, in a number of guises. 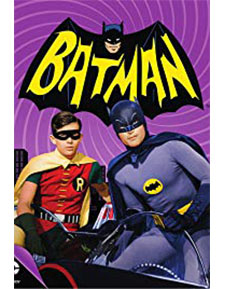 Cesar Romero debuted the Joker on TV. Wide-eyed and campy, he was more funny than scary with his wavy green updo and rent-a-clown makeup. 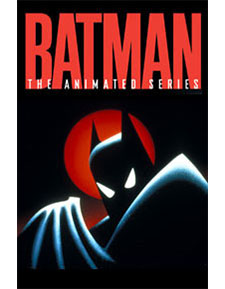 The cartoon Joker, voiced by Mark Hamill, is drawn with sharp angles, from the pointed chin to the hooked nose to the peaks of his green mop. 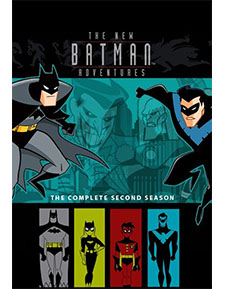 Hamill returned to the role with an animated Joker even more pointed and stylized—minimalist, with black eyes, white pupils, and green hair angular enough for Flock of Seagulls. 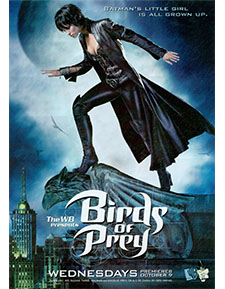 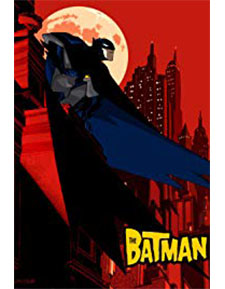 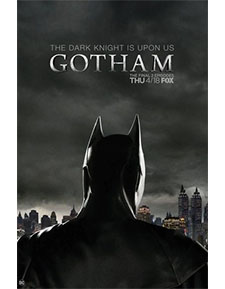 The Joker has come a long way from his first appearance in 1940; that is reflected by the modern-day Joker in "The Joker" movie of 2019. While the role of The Joker has evolved throughout the years, the wild, psychotic character, by and large, has remained the same. The Joker movie pays respect to one of the most well-known supervillains of all time.

The Quality Comix family knows comic books. If you're looking to sell your rare comics, you want a team that is knowledgeable and dedicated. Get your risk-free online offer now.