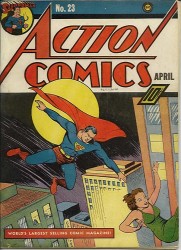 What makes a comic books valuable other than rarity? The characters of course. Action Comics #23 is no exception. Lex Luthor is one of the world's most brilliant minds and most famous villains and he makes his first appearance in this issue. Not the bald, imposing figure most of us know but as a red haired business man. This particular story would also introduce us to The Daily Planet. The CGC Census reports less than 150 copies in existance.