/ Comic Resource Guides & Articles / You Inherited Comic Book Collection: What Should You Do Next?

You Inherited Comic Book Collection: What Should You Do Next? 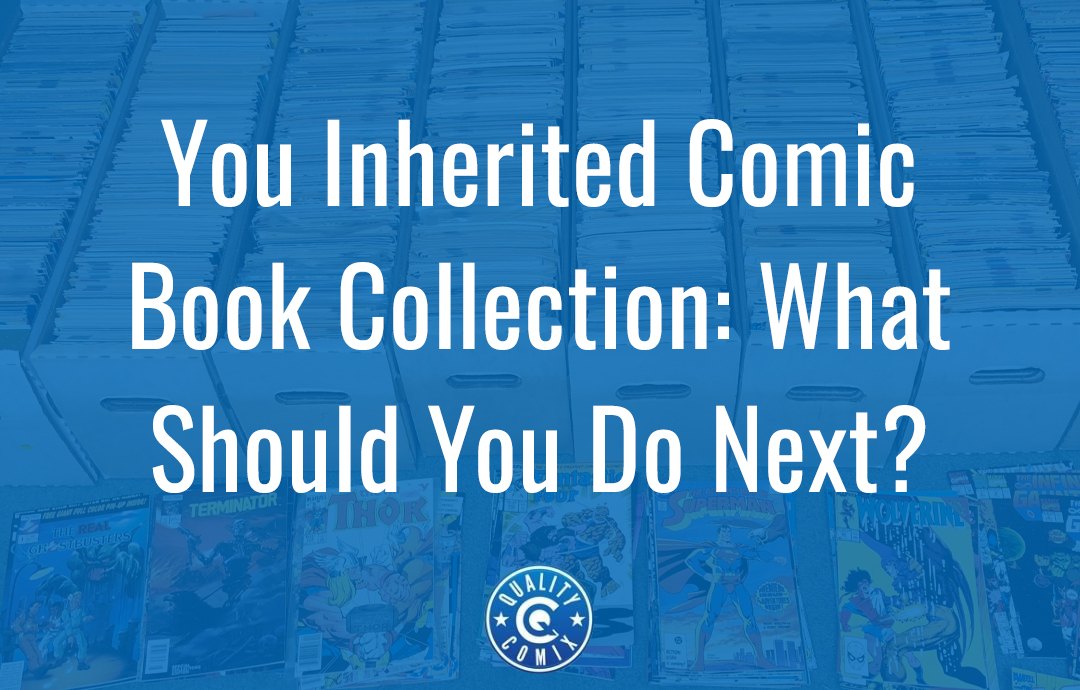 Time passes whether we want it to or not, and eventually, loved ones pass away. Through some set of circumstances, you've ended up with a collection of comic books, and now you're at a loss. What do you do with these? Are they worth anything? How can you sell them and get the most out of them? Let's talk it through.

The Big Decision: To Keep or Sell?

The first (and last) choice you'll have to make is whether you want to keep the collection for yourself or sell it off.

Some of you have already made this choice. Maybe you've always known you wanted the collection, and now that you have it, you want to research it before adding to it. Or, perhaps, you have no interest in comics and want to get rid of your collection as respectfully and as effectively as possible. 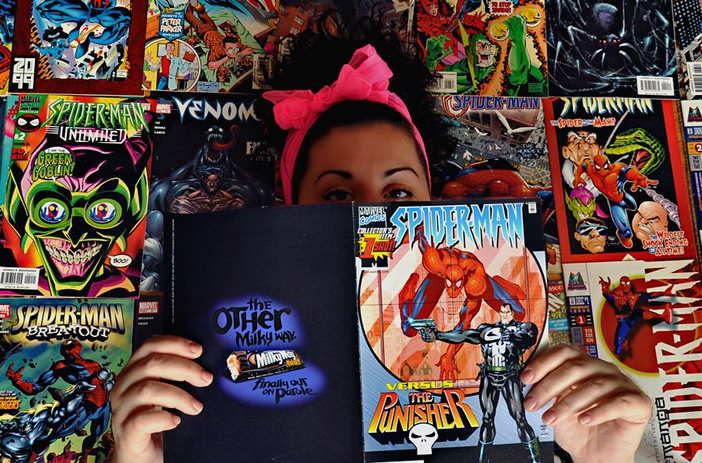 If you're torn, don't worry.

You can always change your mind based on what you learn as you research the collection. It's understandable to have some emotional turmoil, especially when dealing with loss. You shouldn't feel pressured into making a hasty decision. Most comics, if they're going to be valuable, will hold their value long-term, so you never need to rush into selling.

If you need help deciding whether or not to keep or sell the collection, the rest of this post is focused on helping you gather the information you need to determine how to follow through one way or the other.

The first step in handling an extensive, unknown collection of comics is to perform a rough evaluation.

This process can give you a general idea of what you're looking at and what you might expect. For example, a curated collection of 1960s comics can have significant value. In comparison, a massive hobbyist collection of the 1990s and 2000s comics are much more likely to be low-value, excepting key issues. 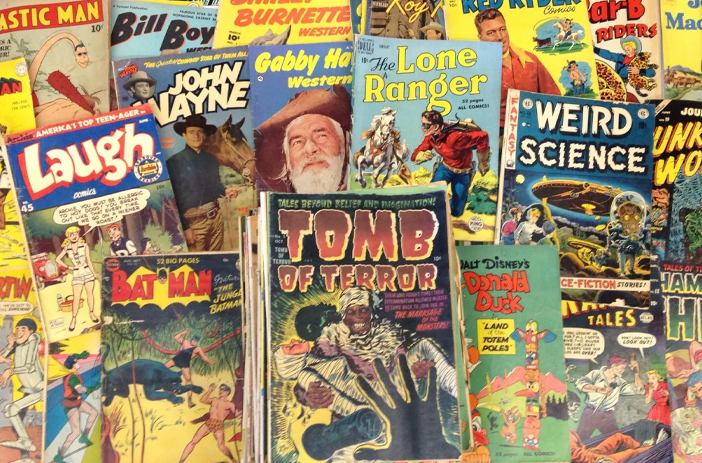 Speaking of "key issues," there will be some terminology throughout this post that you may not know.

If a term comes up and we need to explain it more adequately, check out this glossary for more information.

What should you look for?

1. Quantity of the comics.

A rough count of the number of comics you have to handle is an excellent thing to have. When talking to appraisers and professionals, it's good to know whether you're dealing with a few dozen, a few hundred, or a few thousand comics.

If you want a quick estimate but don't have time to count them individually, you can build a quick estimate by counting a stack, measuring the length of various stacks, and guessing. Also, if the comics are stored "bagged and boarded" (that is, in a plastic bag with a bit of cardboard to keep it flat) and in a "longbox" (a cardboard box meant for storing comics), those boxes can hold roughly 250-300 comics. 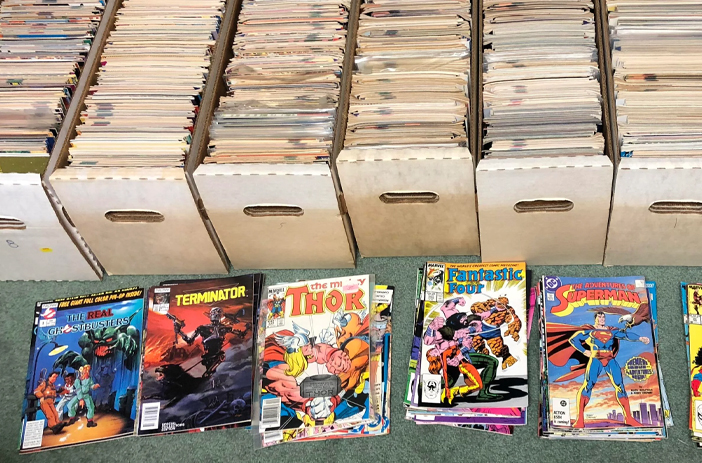 Note: if the comics are "slabbed" – that is, sealed in rigid plastic containers with grade stickers on them – don't remove them from those slabs. These are sealed to maintain the quality and condition of the comics, and the books inside are usually more valuable than average.

2. Condition of the comics.

Condition is a crucial detail. You don't need to be super precise with estimating conditions; an appraiser will likely either be handling the comics in person or asking for good pictures of the books.

Some comics can be in absolutely abysmal condition. When evaluating the state of comics, look for things like tears, yellowing of the paper, chips and missing sections, creases, folds, and other signs of damage. Loose and missing covers and further damage is also possible. 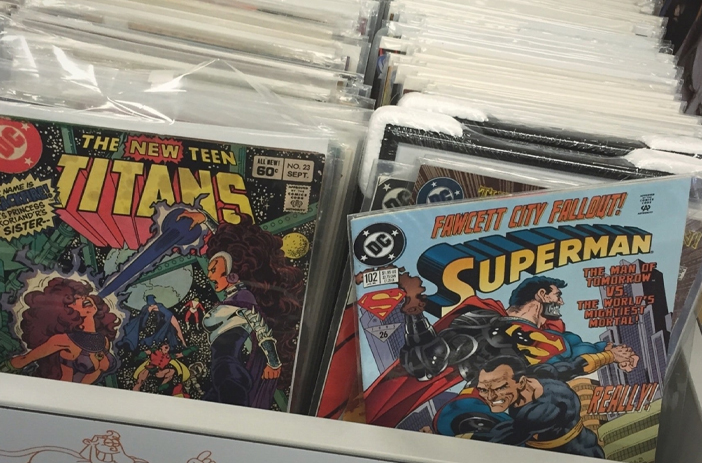 If a comic is damaged, you don't necessarily want to throw it out. Some of the more valuable comics can be worth quite a bit, even in terrible conditions, simply due to age and rarity.

If you're interested in a precise estimate, you can see what the professionals use as a grading scale here.

3. The general age of the comics.

Age can refer to two things.

The first is the number of years of age the comic has behind it. Older comics are generally worth more than newer comics. 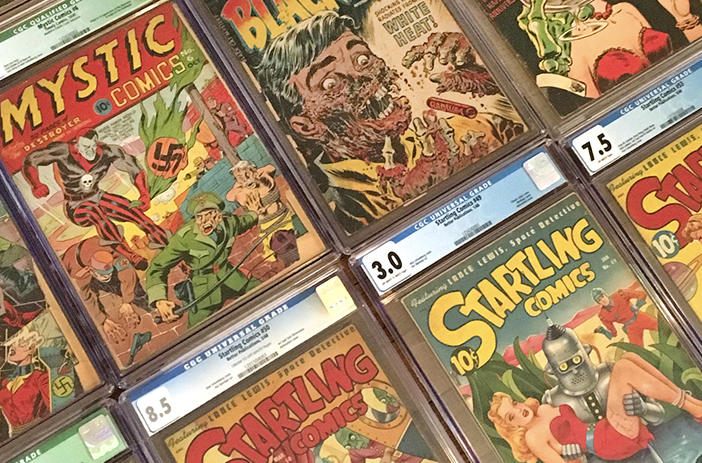 The other is the era the comics are from. Comics are broadly classified into different ages (or "eras") based on details like printing techniques, cultural shifts, which companies were involved in, and more.

Only some people use every era, but having a general idea of the era the comic collection spans can give you a rough idea of how much value you have on your hands. Modern-era comics usually have little value since they're newer and traditionally printed in huge volumes. Older comics, like silver and golden age books, tend to be in the peak intersection between desirable and rare. Action Comics #1, regarded as the most valuable comic in the world, is from 1938.

4. How the comics have been stored.

How the comics have been stored and preserved can give you an idea of how valuable they are and how much value they had to the person who owned them before you. 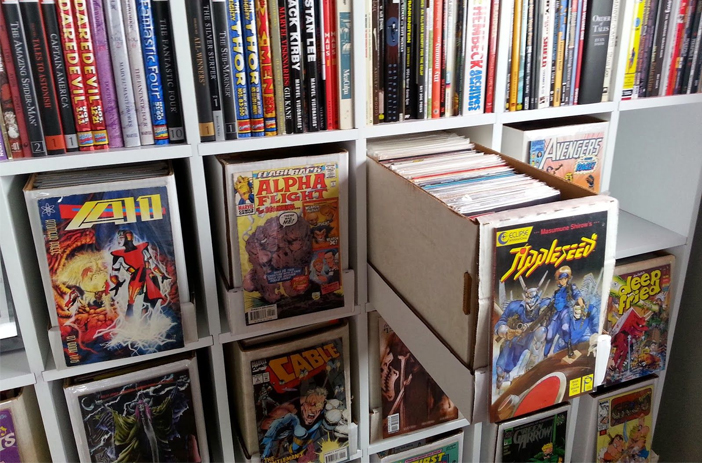 Again, this is just a rough idea. Some people don't take care of valuable books, and others take extreme care of books worth less than $100. Even in poor condition, some of the most valuable comics are still worth a bundle.

One final thing to note is that in some rare instances, a whole collection of comics may be valuable enough to be granted pedigree status. Pedigree status generally means something exceptional about the collection, such as its age or if it's in perfect condition.

They're also often collected when new by one individual, and the individual may have been noteworthy. 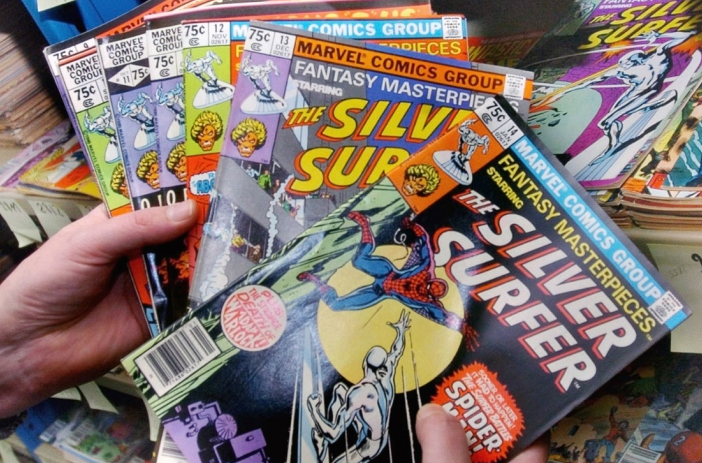 It's unlikely that you have a pedigree collection on your hands (to date, there are only about 60 such collections). Still, if your loved one was noteworthy in the comics world, or the collection seems extremely valuable based on the above conditions, you might look into it.

All the above filters give you a relative idea of what you can expect from a collection. If you're looking at longboxes full of late-90s comics, most of them are probably worth $1 to $5 each. If you're looking at a collection of slabbed golden-age comics, you have some serious money on your hands. All this leads you to decide whether to do a DIY sort and appraisal or get the collection appraised professionally.

Before getting your collection appraised, you'll want to sort it out if it isn't already. Generally, a quick sort means organizing the comics by the title (X-Men, Spiderman, Superman, Batman, etc.) and by the issue number. This process can get pretty confusing given how many different reboots, renames, changed lines, series' and other mix-ups there are. Still, a general sort is better than an unsorted collection. 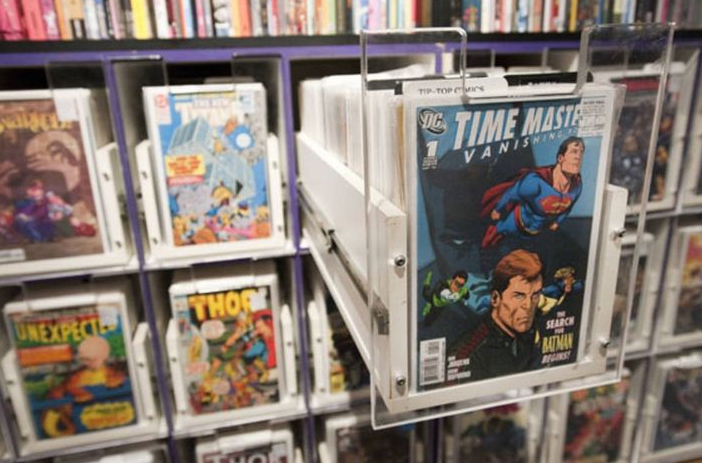 Appraising comics on your own is easier than ever, thanks to the growing prevalence of smartphone apps that can use cameras to scan barcodes or image-recognition to ID comics.

The main thing you're looking for is key issues. Key issues are important, usually because they introduce a character or contain a noteworthy event. Unfortunately, there's no definitive list of keys you can use to cross-reference your comics. Still, various apps can help you pick out the more valuable comics than average or even help you build a complete list of all the comics in your collection. 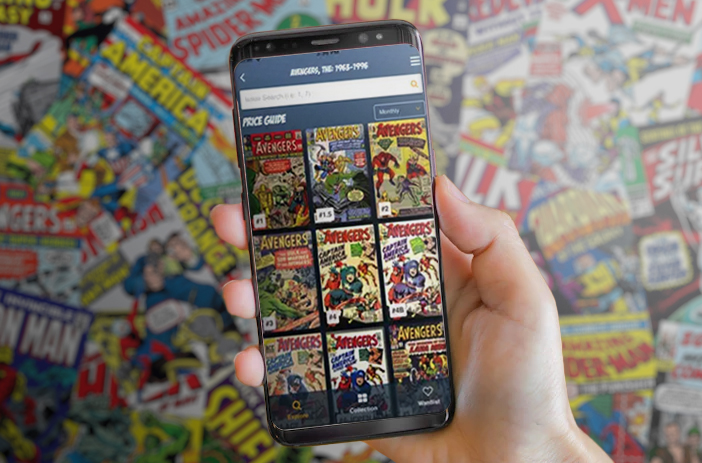 Whether you build a complete list of comics or just a list of the most valuable books in the collection, you can then take that list to a professional for appraisal.

There are generally three ways to get a professional appraisal of a comic collection.

The first is to bring the collection (or a list and photos) into a local comic store. Comic store owners are generally knowledgeable, can help evaluate the general value of the comics you have, and can advise you on how to proceed.

A word of advice: Don't feel pressured to sell.

Some small percentage of local comics dealers are somewhat shady and may want to pressure you into selling for less than the collection is worth. Most shop owners aren't like this, but there's always the risk of a bad apple, you know? Follow your gut, and don't be sweet-talked into making a fast decision.

The second option is to approach an online comic expert like ourselves. For example, you can click here, fill out our form with some basic information and a description of the collection, and we'll tell you what we think about it. There's no obligation to sell, but we can advise you on how to proceed! You get some peace of mind knowing what a fair offer is, and you'll also have the option to sell them for that offer if you decide. 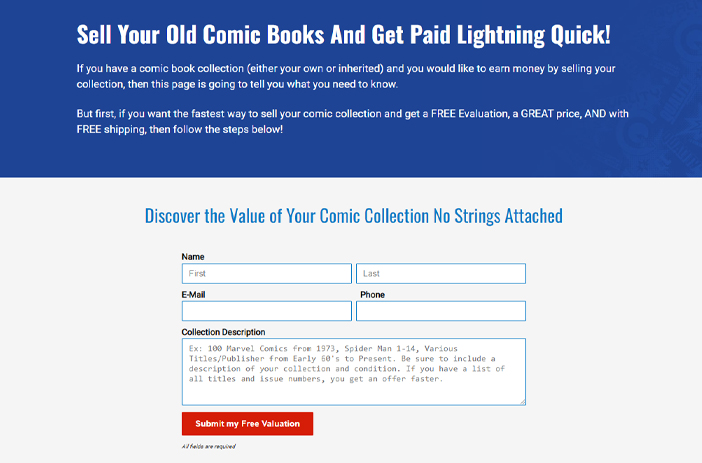 The third option is generally only available for significant and valuable collections, and it's to have a professional appraiser visit you to see the comics in person. You'll need to identify such an appraiser and reach out to them to make a plan.

Listing and Sale for an Inherited Comic Book Collection

Once you've appraised your comics, let's say you want to sell them. 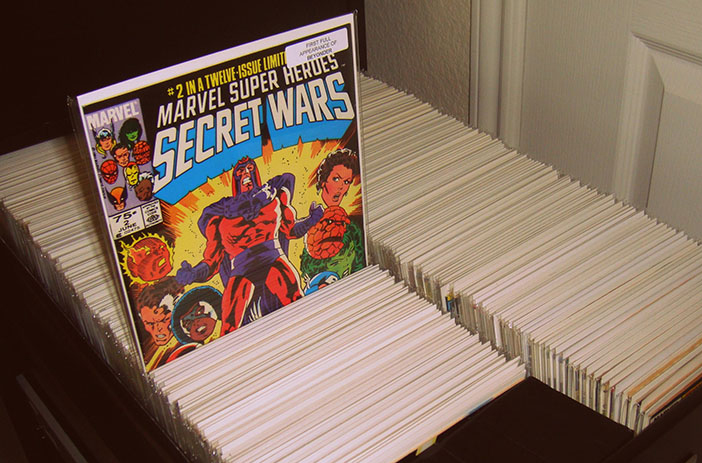 What are your options?

As for where to sell, there are options there as well. You can sell to a store, sell online to a company that deals in comics, or sell individually on eBay. You can even post on Reddit or a comic collectors forum and sell privately.

Whatever your final decision, it's essential to do what's right for you. A comic collection doesn't do you any good if you don't want the collection but can't part with your comics. If that means you need to sell your comics for less than market value just for peace of mind, that's fine too. It depends on the time you want to invest and your attachment to the comics.