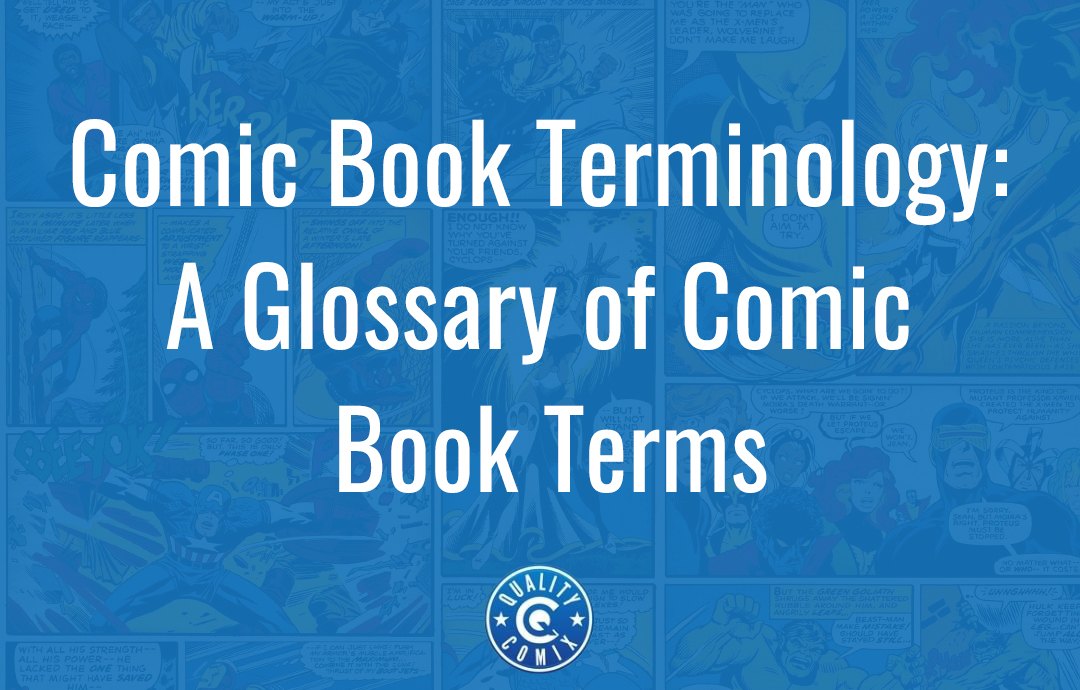 The world of comics is about more than just the names of the superheroes and villains on the pages. It's about the ecosystem of print and digital, the grading and the slabbing and the sale, and so much more.

Many people find themselves researching the exciting world of comics for the first time, either as a newbie collector or as someone who has come into possession of a collection they need to sell. It helps to understand the vocabulary we're likely to use when talking about it, so here's a glossary of standard comic book terms. If there's one we've mentioned and haven't explained, or if there's one you've heard that isn't on the list, please let us know in the comments, and we'll clarify by adding it! 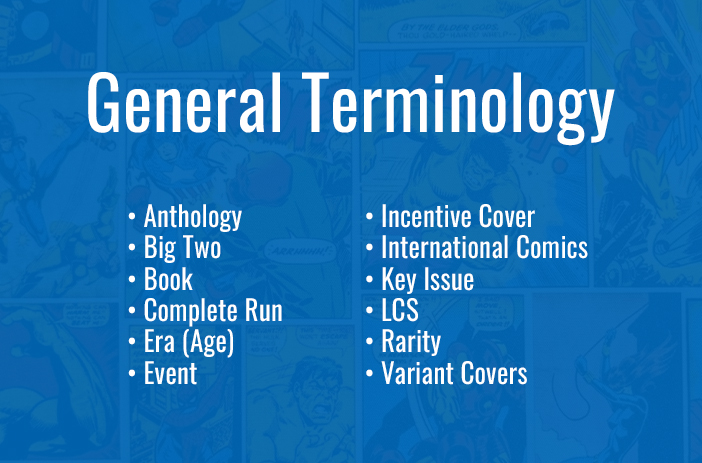 Anthology – A run of comics, or a more extensive trade or omnibus, made up of individual stories and contributions from various authors, typically centered around a common theme or character.

Book – An individual comic book may refer to a specific issue, a full-trade paperback, or an omnibus.

Complete Run – An entire run of each issue in a story arc. A longer ongoing series may be defined by runs with a given author or artist at the helm.

Era (Age) – The year range in which a comic was published. Definitions vary, but there are numerous "ages," including:

Event – A particular story arc or happening in a comic, usually of significant importance, typically changing the story's paradigm or framing. Marvel's Civil War is a famous example turned into a movie.

Incentive Cover – A variant cover that was only obtainable by a retailer if that retailer ordered a specific volume of the standard cover; by definition, rarer than the average cover.

International Comics – An umbrella term for comics originating from nations other than the USA.

LCS – Local Comic Shop/Store. Used to refer to whatever local store may deal in comics in a given area.

Rarity – How many copies of a specific comic are known to exist? Here is an example scale as defined by Overstreet Price Guide:

Variant Covers – Comics with an alternative cover, often used as a promo, incentive, or special edition. Variant covers are usually rarer and potentially more valuable than standard covers, depending on the era. 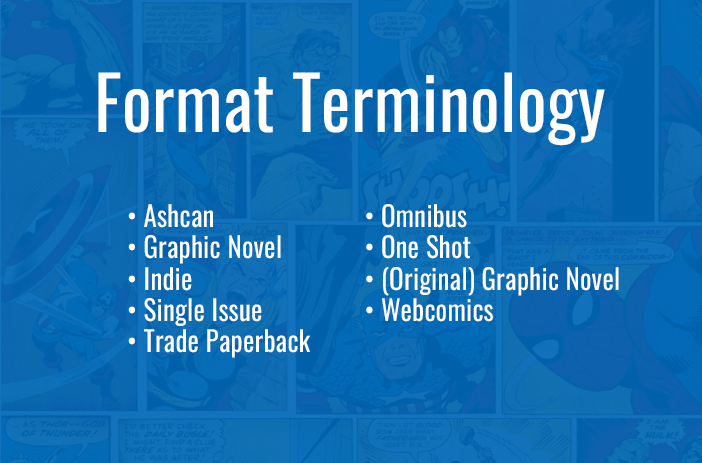 Ashcan – A promotional copy of a comic given to retailers to advertise an upcoming book, usually not meant for sale. Sometimes, ashcans were used to establish trademarks or copyrights before the actual creation of a comic.

Graphic Novel – Typically a long-form comic, sometimes square-bound. Usually a self-contained story, often with more adult themes and complex narratives. The definition is variable depending on who you talk to.

Indie – Indie comics are created by small publishers rather than larger corporate entities. Short for "independent."

Single Issue – A single book, often around 20-30 pages long, usually part of a more extended series and numbered with its place in the story.

Trade Paperback – A collected edition of a story or story arc, also referred to as a "trade." These usually contain around 5-10 issues of a story and are meant to make it easier to collect a whole run without buying individual issues.

Omnibus – A more extensive single volume collection of issues in a story, often containing an entire story run or 25+ issues of a run (for longer runs.)

(Original) Graphic Novel – Typically, a comic series that is released directly in trade paperback form without being released as individual issues.

Webcomics – Comics published online. These can be a traditional format similar to newspaper comics, or they can be avant-garde comics making use of digital-only integrations like the infinite scrolling canvas or the use of animation in panels. 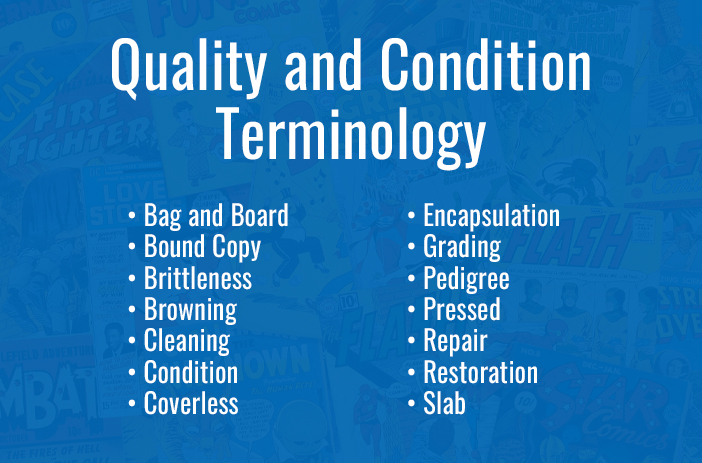 Bag and Board – A "bag and board" is a way to store and preserve comics by placing them in a protective plastic bag, usually with a stiff cardboard sheet (a backing board) to prevent slouching, bending, or other damage. This technique is the most common way to store comics to preserve them without the effort or expense of grading and encapsulation.

Bound Copy – A series of comic issues that have been cut or trimmed, then sewn together into a book, like a prototype omnibus. Publisher-bound copies are typically rarer and more valuable than owner-bound copies.

Brittleness – Old comics, particularly those exposed to the elements, experience degrading paper quality that leaves them brittle and prone to falling apart.

Browning – Browning occurs when the paper used in comics oxidizes over time, particularly when exposed to the elements; typically, the more browning present in a book, the lower the quality. For older comic books, it's nearly impossible to find issues without browning, so this may be less of a problem.

Cleaning – A process wherein dirt, pencil marks, and other blemishes are removed from a book without damaging, replacing, or otherwise altering the underlying comic book.

Condition – The grade of a comic reflects its condition. Conditions can be:

Coverless – A comic that has had the cover removed. Covers are frequently lost through reading and improper storage of a comic. The store may have also removed covers in an attempt to destroy risqué art or as part of a return and reimbursement program from a publisher for unsold issues. Coverless does not mean valueless; particularly high-value key issues have demand for coverless comics as filler for collections by collectors who can't otherwise afford the intact version.

Encapsulation – Also known as "Slabbing," this practice involves encasing a comic in a thick plastic container to preserve and protect it. This slab is accompanied by grading the book's condition and typically "locks" the comic's condition and, consequently, the book's value. Encapsulation is generally done only by a grading authority like CGC.

Grading – The act of sending a comic to a comic authority like CGC for evaluation. The grade of a comic affects its value. The grade reflects the condition and is frozen via encapsulation.

Pedigree – Comics of an exceptionally high or noteworthy condition as part of a specific collection. The comic itself may not be as important as the fact that it was part of a more extensive collection such as the Mile High Collection.

Pressed – The act of removing minor indentations and bends in a comic through heat, humidity, and a flat press to flatten the comic. Modern pressing services are often offered by companies like CGC and can improve the quality and grade of a book with minor blemishes. The company must clean a book before pressing. Otherwise, dirt may be packed into the pages, further damaging them. Pressing isn't typically considered "restoration" by graders.

Repair – The process of cleaning and repairing a damaged book may include using tape, glue, or other additives. Usually considered a defect or damage to serious collectors.

Restoration – An intensive process meant to improve the visual qualities of a comic. Restoration can include anything from cleaning and repair to adding missing ink. Restoration can potentially reduce the value of a comic, and comics will receive a lower rating when graded. 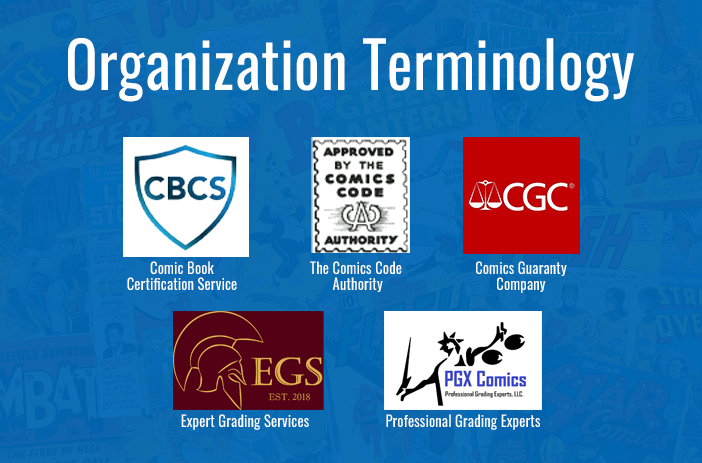 CCA – The Comics Code Authority was formed in 1954 to regulate the comics industry. The code regulated content, including adult themes, and was eventually abandoned across the board in the 2000s and 2010s.

EGS – Expert Grading Services. They are another comics grading agency that is relatively new (founded in 2018) and the source of much skepticism in the collector's circles at the moment.

PGX – Professional Grading Experts. Another comic grading agency, this company had a rocky early history but has done a lot to improve its reputation and reliability. It still plays second fiddle to CGC and CBCS. 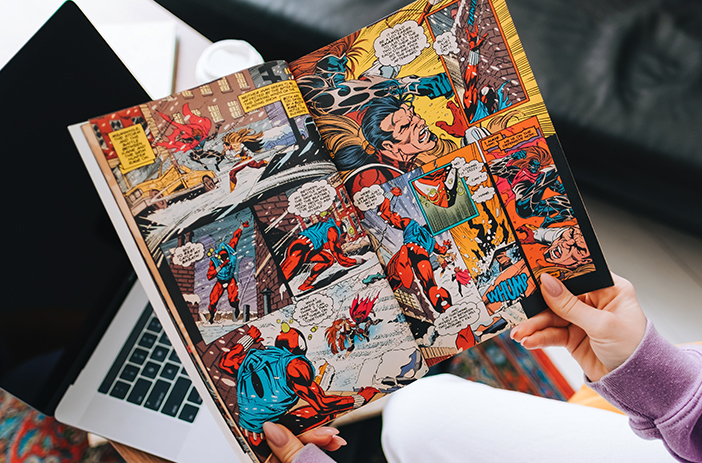 Did we miss anything?

There are plenty of comics-related terms we didn't cover, like those relevant to the creation (writer, inker, artist, publisher) and the layout (gutter, word balloon, panel), but, given that we focus on buying and selling comics, we figured terminology related to the trade of comics would be more relevant. Still, if there's something you have a question about, feel free to leave a comment! We love to hear from you, and we're standing by to answer any questions.

Please drop us a line if you have a collection or an individual comic you would like appraised. You can also fill out our appraisal form to get your collection professionally appraised at no cost.

We're not a grading authority, but we can give you an excellent idea of what your collection may be worth and help advise you on the following steps to take if you want to sell.