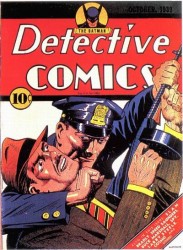 Batman is packing heat! That's right, this is Detective Comics #32, the first time Batman uses a gun and the first time a costumed super hero used a gun in comic books. With these early Batman appearances there will always be a "first" something or other. At this point it's rarity and the newness of the character dictating prices. But you CAN still see that there are varying degrees of importance during this era. Looking at the value of the issue before this is a good way to help understand that all early issues are not created equal. Out of 48 unrestored issues registered with CGC Census only 10 are over VG/FN 5.0. Of those 10 only 2 are over a VF- 7.5. Rare indeed.