/ Comic Resource Guides & Articles / Thor Vs Superman: Who Would Win This Fight?

Thor Vs Superman: Who Would Win This Fight? 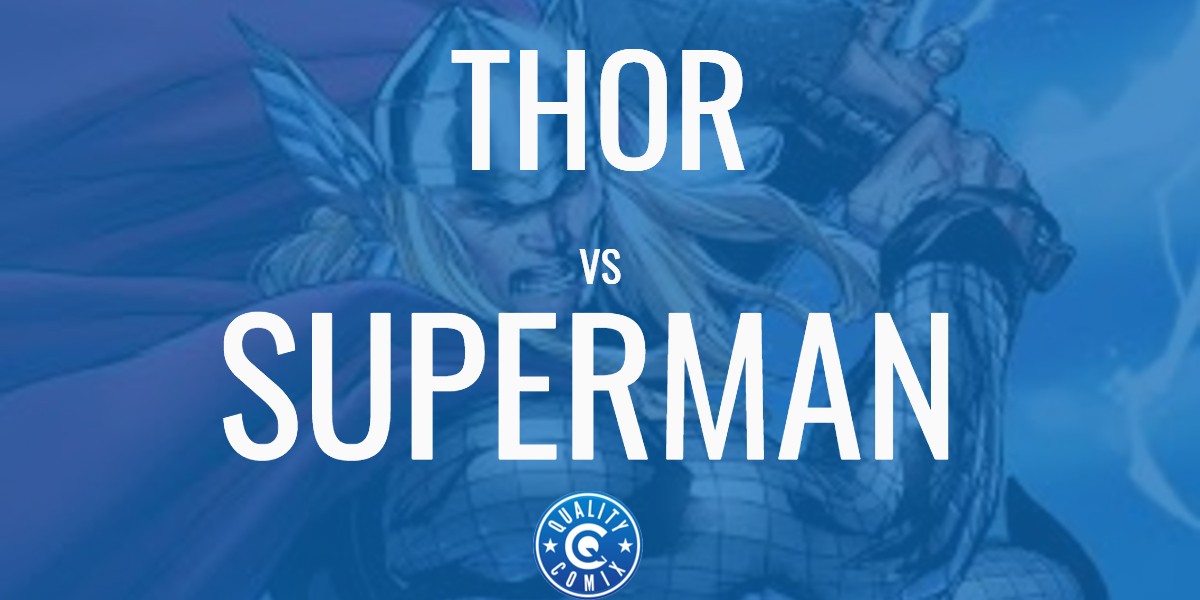 Superman is a superhero with an iconic symbol on his chest, and Thor is a Norse God that wears a cape.

They are both super powerful, but who would win in a Superman vs Thor fight?

This question has been debated for many years.

Some say Thor because of the hammer he throws at people's faces; others claim Superman because he can fly around the Earth and even turn back time.

Let's find out exactly who would win this battle of the legends.

Superman is the last son of Krypton. His real name is Kal-El, and that was the name given to him on Krypton by his parents.

His parents died when Krypton was destroyed, but he was sent to Earth by his father, Jor-El.

Upon reaching Earth, the Kent family found him, who gave him the name of Clark.

And so, Superman has an alter ego of Clark Kent, which serves as his normal regular 'everyday name and identity. Becoming Superman when the world needs him.

He has a range of superpowers and is the protector of Metropolis and planet Earth.

DC Comics created his character, and he has remained one of the most iconic characters in comics and indeed TV and cinematic history.  His first appearance in his own comic came in 1939 in Superman Issue 1.

Thor, also known as The Mighty Thor, or just Thor for short.

He was born on Asgard but now protects Midgard (Earth).

Thor's character hails from Norse mythology, but with regards to this debate, we are referring to the Thor character created by Marvel Comics.

For this character, Thor resides on Earth but travels to Agard regularly, where his father Odin lives along with his mother, Frigga.

Thor has a range of powers and is called the God of Thunder. He tends to wear a suit of armour and a red cape and is also known to wear a helmet.

Thor's strength is considered to be among the strongest in all of Marvel. Thor has enough power to knock down Captain America with a single blow and is strong enough to destroy entire space ships.

Physically he is considered of similar strength levels to the Hulk and certainly a better fighter.

This was highlighted in Thor: Ragnorok, where Thor defeated the Hulk in the contest of champions.

Superman excels at breaking things, as seen when he broke an entire mountain into pieces just by punching it once. Superman can also level buildings with his bare hands and fly into space without getting tired or needing oxygen as normal humans do!

So, on the surface, we tend to think that they are of equal level, but Superman has even moved entire planets in the comics.

Superman does win the strength battle but only just.

Supermans powers consist of super strength, super speed, invulnerability, and flight. Superman is one of the most powerful individuals in the DC Universe and has been shown to have enough power to destroy worlds without an effort.

He can also shoot intense 'lasers' out of his eyes and freeze things with his breath.

This mix of powers means that Superman is incredibly dangerous to Thor.

Thor's Lightning Powers Would Help Him

Thor's powers range depending on which version of Thor we are talking about. However, his lightning power is reasonably consistent, and Thor can summon and use lightning at will.

Thor's lightning powers could prove to be especially effective against Superman because Thor can control it and use it as an attack.

He can also harness the power and direct it using his hammer Milonjor or his axe, storm beaker.

Thor can also fly using his weapons which he throws into the air, and they carry him off.

When it comes to a breakdown of Superpowers, Thor tends to get the win.

Yes, Superman has slightly superior strength, and yes, he can freeze people, fly and shoot blasts of energy from his eyes.

But Thor can summon the power of lightning and has superb fighting skills and the use of weapons.

This, for us, means that power-wise, Thor does have things stacked in his favour.

Superman has 2 significant weaknesses. The obvious one is magic and the other Kryptonite.

However, Thor does not have access to either magic that can affect Superman or Kryptonite.

Thors Weaknesses
As great as Thor's powers are, we know that he can be defeated and know that generally if you take his weapons away, he is a lot weaker.

Given that removing his Hammer or Axe will result in the lack of flight, this essentially makes life a lot easier for Superman.

Thor is a trained warrior and has access to weapons along with his other powers. These will help Thor to win over Superman.

The weapons give him a considerable edge, especially considering Supermans lack of fighting ability.

Supermans main advantage tends to be his 'super speed', his ability to fly and, of course, the energy beams from his eyes. And the slight nod in strength.

From a combat perspective, these do give him an advantage. The eye blasts especially make fighting Superman a nightmare for Thor.

The Variations of Superman

The variations of Superman differ in terms of background and story but generally not powers.

So, while there are a few versions of him from a story perspective, his powers remain the same.

The Variations of Thor

Over the years, there have been various versions of Thor created, but we will consider the 5 main types of Thor to simplify things.

And then we will be able to give a better answer to who would win in a battle between the 2 legends.

Thor: The God of Thunder

If we look at Thor, we generally consider the main version of Thor. Most people think of Thor: The God of Thunder.

This Thor is the most well regarded and lives on Earth under the alias of Donald Blake.

Rune King Thor is one of the strongest versions of Thor. He had to undergo a series of challenges to gain the power of the Runes.

Once he had this power, he was able to tap into the unlimited energy of the Odin Force and was virtually unstoppable.

Ultimate Thor was created in a bit of a 'revamp' of the old Marvel characters. This version has the same powers as Thor but is less reliant on his weapons.

Possibly the Thor we all love the most due to his excellent portrayal by Chirs Hemsworth.

In truth, he is a bit of a mix of Thor the God of Thunder and Rune King Thor by the end. But his story arc is fantastic.

The last on the list is Old King Thor, possible the most powerful there is, and eventually, he becomes a true God resurrecting the Earth.

Old King Thor lives alone as Asgard has been destroyed, and Earth lays in ruins.

However, when Galactus comes for the Earth, he has to fight him off, showing just how powerful he is.

Superman vs Thor: Who Would Win The Fight

OK, so here we are, the big finale, who would win a fight between Superman and Thor?

Well, in this writers opinion, based on the evidence, it would be Thor.

While Thor God of Thunder would be a more even battle, the Rune King Thor and Old King Thor would be far too much for Supes.

His fighting ability, strength, powers and weapons mean that dear Clark Kent would ultimately be outgunned and out of his depth.

So, there you have it. Our breakdown and verdict on the battle between the 2 legends.

What did you think, and who do you think would win?