/ Comic Resource Guides & Articles / Marvel Vs DC: Which Is Better?

Marvel Vs DC: Which Is Better? 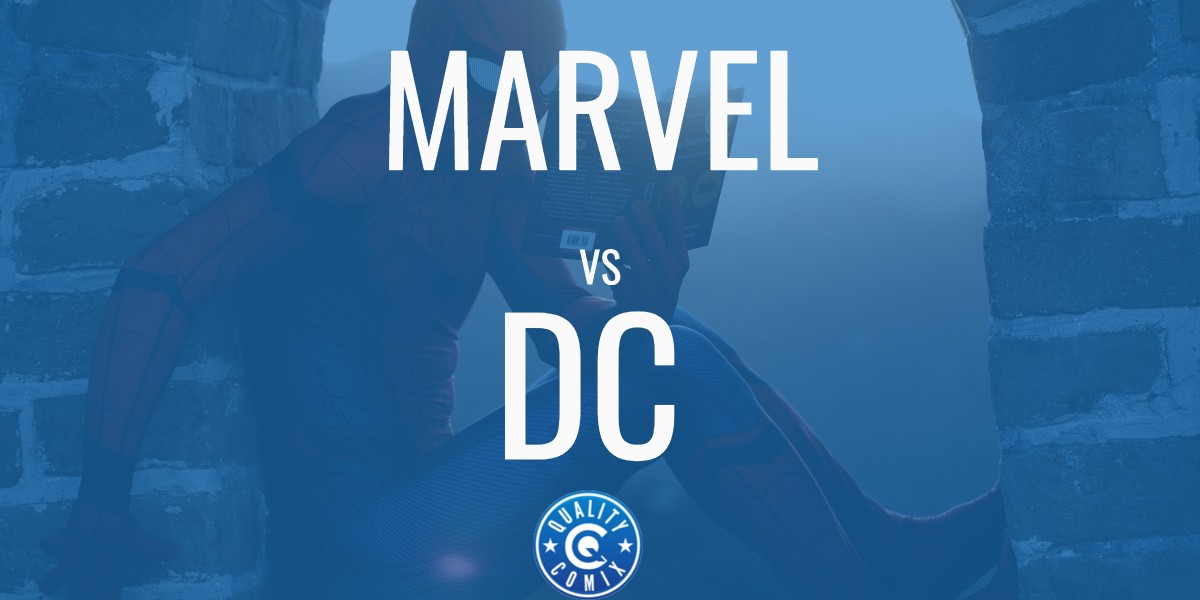 If you're a comic book fan, you know there are two major comic book companies globally. One is Marvel Comics, and the other is DC Comics.

The rivalry between these two publishing giants has been going on for more than 70 years now.

But which wins the ultimate battle of Marvel vs DC?

In this article, we will take a look at the differences and let you make up your own mind.

What is DC Comics?

Introduced in 1934, DC was initially known as "National Allied Publications".

However, in 1946 the name was changed to "National Comics Publications" and finally became DC comics in 1977.

What Is Marvel Comics?

Marvel Comics is a large US publisher of comic books and related media.

It is best known for its superhero characters, including Spider-Man, Iron Man, Hulk, Captain America, etc.

Marvel Comics wasn't its original name. The first name was Timely Comics and then Atlas Comics.

What is the Marvel Universe?

The Marvel Universe is a fictional world in which the stories of Marvel Comics take place. It also serves as continuity for all media forms based on these properties, with many television programs and video games being directly connected to it.

There are actually 2 Marvel Universes.

The Marvel Cinematic Universe of which their 'movie' timelines take place.

And the Marvel Comics Universe. The conic Universe follows a different timeline and events than the comic one.

What Is The DC Universe?

The DC Universe is the fictional Universe where much of DC Comics' publications takes place. It is a multiverse that comprises multiple planets and timelines, with some storylines occurring in alternate realities which exist outside mainstream continuity.

The Snyderverse refers to the timeline and story created by Zach Synder when he directed The Justice League film.

What is the difference between Marvel and DC?

While both comics publishers present a make-believe universe, Marvel brings more realism to a fantasy world.

In addition, marvel takes more risks, so they come out with highly unique movies such as Guardians of the Galaxy. However, DC is better at giving their characters depth and backstories (ex. Batman).

One of the most common debates in comic books today is which company has a better roster of heroes. Some people prefer Marvel because they are more realistic and have a darker tone to their stories, while others enjoy DC's characters with depth and backstories.

One of the critical characteristics of the Marvel comic universe is that their characters/ heroes are more likely to struggle. This is seen in their movies, comics, and TV shows, which focus on the struggles that these heroes are going through more often than not (due to Marvel's realistic style).

They also tend to be born like ordinary people who undergo accidents and transformations to gain their power.

Peter Parker was just an ordinary kid who was bitten by a radioactive spider and gained the powers of Spiderman. However, Bruce Banner is not born with his ability (the Hulk). But instead, he transforms into him from time to time because of exposure to gamma rays.

Captain America was a skinny kid from Brooklyn who was turned into 'Cap' by the super-soldier serum.

DC characters Are More Likely To Be Born Great.

In contrast to the Marvel roster, the DC heroes tend to be born great.

They have magical powers, mystical origins, or they were born into a wealthy family.

Superman was sent to Earth by his father Jor-El from Krypton with extraordinary abilities and given human parents on Earth, so he could be raised as an average person who would not know of the planet's destruction until it is too late.

Wonder Woman is also a demi-god who was raised on the island of Themyscira by her mother, Queen Hippolyta and trained to be an Amazonian warrior.

Batman is also born at Wayne Manor with his parents Thomas and Martha, but he has no superpowers or abilities; instead, he possesses great wealth.

Aquaman is born from the Atlantean King, who inherited his power.

Even Cyborg was a great college footballer.

For the majority of DC characters, life tends to have come with many advantages.

What's the Difference Between Marvel and DC?

When it comes to the differences between Marvel and DC, we need to address the similarities first.

Many of the characters in the DC universe have a matching character of powers or similar circumstances to the Marvel Universe.

Batman and Iron Man are both billionaires and use technology to help them to fight crime.

Aquaman and Black Panther are both kings.

Even the villains Thanos and Darkseid are very similar.

Jokingly, many see the DC Universe as 'darker'. That might be the case on a cinematic level but in the comics. Marvel can be pretty dark. A classic example of this is the characters Wolverine and the Punisher.

There are, however, 3 core differences that stand out.

We've already discussed them a little, but here they are again, and we haven't mentioned one new difference.

The DC characters are likely to be born 'great' or God-like.

Marvel characters are likely to be 'transformed' by an event or encounter everyday problems that life throws at people.
DC cities are made up.

That last point is one of the significant differences.

Marvel Vs DC: Who Has The Strongest Heroes?

While you might be thinking Captain Marvel V's Superman or Hulk v's Aquaman. In truth, both the Marvel and DC Universe have a wide range of entities that are far more powerful than the 'roster' of heroes and villains that you might commonly know.

Probably the 2 heaviest hitters are Marvel's Protege and DC's The Presence.

The Presence is basically the God of the DC Universe while Protege is a cosmic entity that can mimic many other entities powers.

So, he could have powers equal to anyone or anything.

Which is a weird twist that means that he can equal the power of any DC Character in our hypothetical battle. So, for lack of a better word, generally speaking, a fighting battle between rosters would probably be a draw in terms of power/ strength.

The Verdict
So, who wins in this battle of franchises?

Well, there can only be one winner...us.

Yes, without a doubt the customers are the winners because we get to read these amazing stories and watch the incredible films.

On a personal level, most people will tend to have a place in their hearts for a character from each franchise. And that's the way we like it.

Because in our Universe, you don't have to have a winner in this contest.

In the end, it really doesn't matter who you prefer. This is a personal preference, not an objective winner in any way, shape or form.

This article was written to highlight some key differences between Marvel comics and DC comics to help people make their own decision about which franchise they want to invest their time into reading more of.

Or even better, read them both.