/ Comic Resource Guides & Articles / Harley Quinn vs The Joker: Who Would Win?

Harley Quinn vs The Joker: Who Would Win? 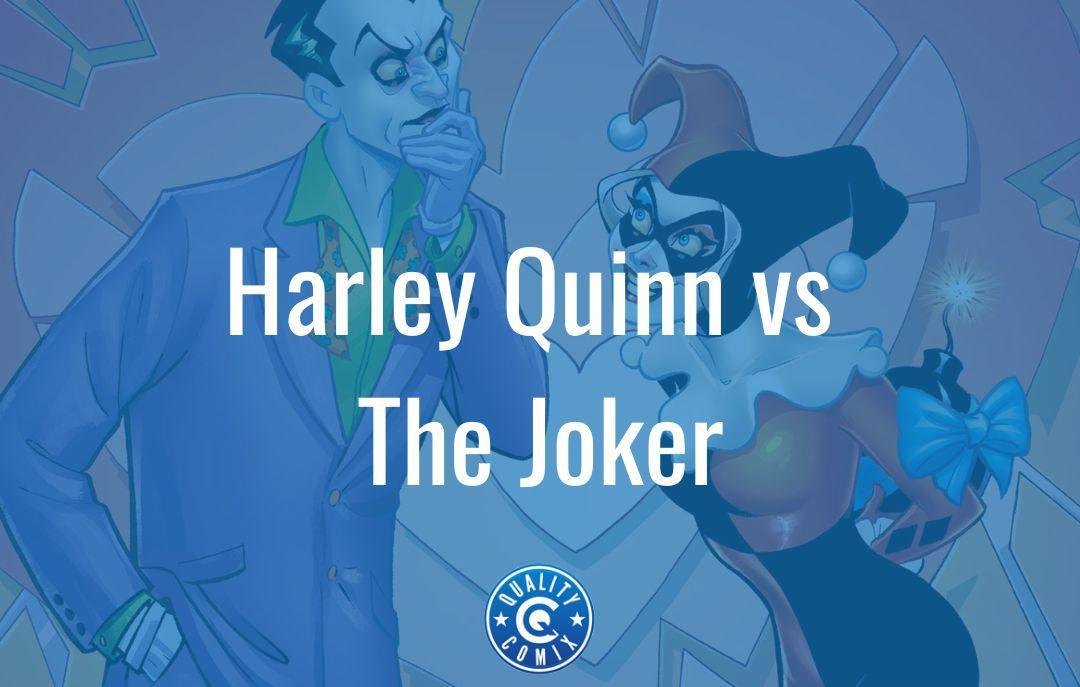 Harley Quinn and The Joker are without a doubt one of Gotham City’s most iconic and dysfunctional relationships, rooted in codependency, manipulation, and downright insanity. This explosive duo have kept comic book and graphic novel fans hooked, be it on the cinematic screen or the page.

But the question on everyone’s lips is ‘Harley Quinn vs The Joker: who would win?’.

Who is Harley Quinn? 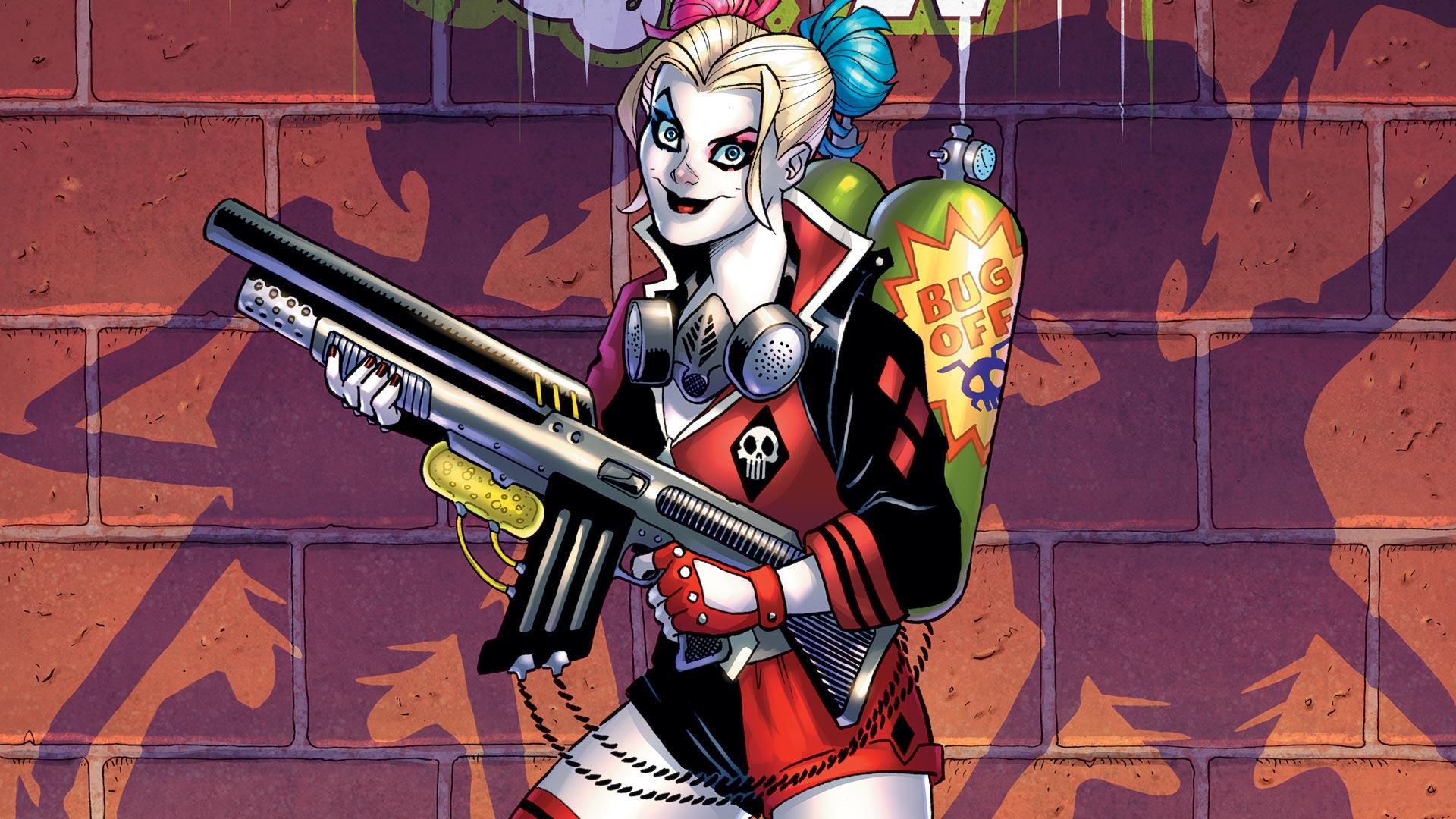 Born Harleen Quinzel, Harley Quinn worked at Arkham Asylum as a psychologist. After working closely with The Joker and falling under his spell, the two become lovers. Ultimately, The Joker wears down her sanity, manipulating her into becoming his henchwoman. Once she helps her lover to escape the asylum, she takes on the new identity of Harley Quinn.

The character of Harley Quinn was originally created as a sidekick to The Joker for Batman: The Animated Series, appearing in the show’s 22nd episode in 1992. It was not until 1999 that Harley was introduced into comic book canon, thanks to a one-shot comic called Batman: Harley Quinn #1.

Harley has had several aesthetics since her introduction. Starting out with a jester costume and chalk white skin, this was then changed to a significantly more revealing two-piece costume. Now, Harley is more recognizable for her striking pink and blue eye makeup and tips of the hair, and baseball bat.

Who is The Joker? 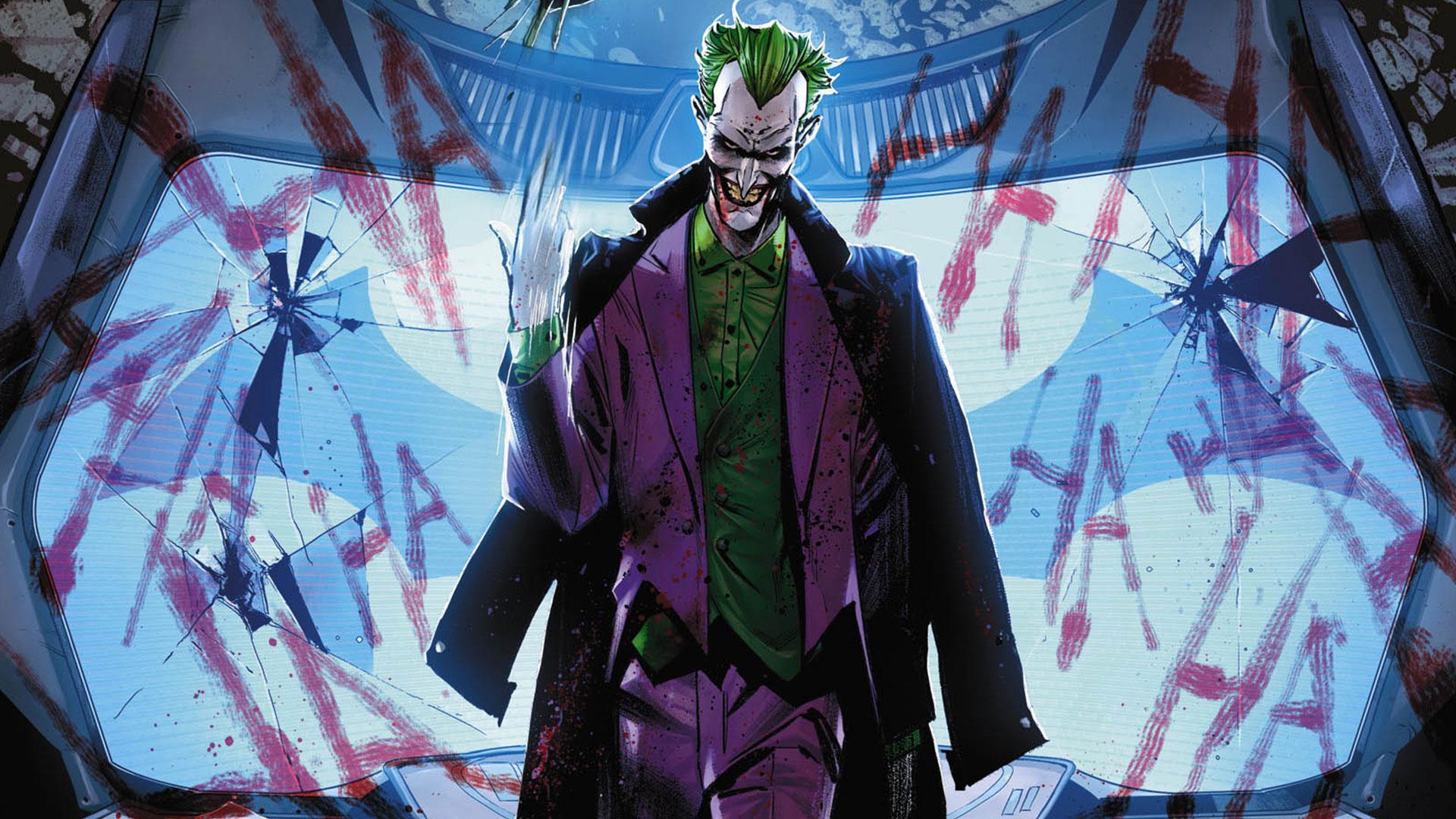 First introduced in Batman #1 in 1940, The Joker is an iconic supervillain and archnemesis of Batman. Not only this, but he has appeared in multiple DC Comics over the years, battling members of the Justice League like Wonder Woman and Superman. Due to his clown-like appearance - complete with large, wide red smile, chalk white face, and distinctive green hair - The Joker continues to be one of the most recognizable supervillains in DC comic book history. He doesn’t need much of an introduction!

Though born a normal human, Harley received enhanced abilities before embarking on a tour of mayhem with - and often without - The Joker. Let’s first take a look at her strengths.

Before dating The Joker, Harleen Quinzel was a respected psychologist. Though Harley is admittedly unstable, there is no denying her intelligence, even if it is applied with little morality.

Whilst a psychologist, Harleen was also highly skilled in gymnastics. As Harley, this means she is in peak physical fitness and is adept in martial arts and hand-to-hand combat.

Though this is not always the case with the character, in Harley Quinn vol. 1 #30, released in 1999, Harley was injected with a serum by plant-controlling Poison Ivy. This serum supposedly increased Harley Quinn’s reflexes, strength, and agility.

Whether it was voluntary or involuntary, depending on if you look at the film or comic books, at some point Harley ended up in a bunch of acid thanks to The Joker. This makes her immune to most, if not all, poisons - which is particularly helpful in her relationship with Poison Ivy, as she is immune to Ivy’s poisonous kiss.

Harley Quinn is rarely seen without her iconic wooden baseball bat and is proficient in using a variety of firearms.

Harley is part of the Gotham City Sirens, along with Catwoman and Poison Ivy. Although this partnership is tumultuous to say the least, she can always rely on the Sirens and her loyal hyenas to help her out in times of need.

The Joker manipulated and abused Harley Quinn for years. Depending on your interpretation, Harley still has a toxic love for The Joker, and thus would be unlikely to kill him, or hates him so much that her anger might cloud her judgment. Either way, it will not be a fair fight.

Harley Quinn is known to be highly allergic to cats.

Thanks to her dip into acid and being manipulated for a period of time, Harley is highly unstable. Due to this, she is susceptible to random outbursts, mood swings, and hallucinations.

The Joker: Strengths and weaknesses

One of DC’s most unpredictable and dangerous villains, The Joker is bad news for anyone on the side of good. Villain-wise, let’s first take a look at his strengths.

Before falling into a vat of acid, The Joker was employed at the chemical plant as a chemical expert. Thus, he has a vast knowledge of chemicals, allowing him to create effective gas bombs and chemical weapons to defeat his opponants.

Like Harley, despite his insanity, The Joker is undoubtedly a genius - a criminal genius at that!

Potentially The Joker’s greatest skill is his powers of manipulation, especially when paired with his chemical expertise. These skills have been previously used to persuade Harley to break him out of Arkham Asylum, and even manipulate Superman into killing Lois Lane and controlling the world.

Furthering his stylisation as a clown, The Joker weaponizes prank toys, playing cards, and other fun - and often humorous - items. Again coupled with his chemistry skills, he often includes a poisonous element to his weaponry.

Joker has a very high pain tolerance, if he can even feel pain at all. In fact, in The New 52 Detective Comics #1 by Dollman, The Joker has his face surgically removed with no pain at all, which he then proceeds to use as a mask. Whether this is an enhancement due to the acid or simply an element of his insanity, we do not know.

Despite numerous fights and stints of jail time at his hands, The Joker is obsessed with Batman, so much so, it has always been a toss up between Batman and Harley Quinn as to which one The Joker loves the most.

It could be said that The Joker’s existence is defined by his feud with Batman. In fact, in the multi-comic book storyline Emperor Joker, The Joker even refuses to erase Batman from existence.

Even though The Joker is invulnerable to chemicals and poisons, he is ultimately taken down by a mosquito sting in Batman #663.

The Joker has a strong aversion to magic - which can be seen in his angry outbursts in Knight and Squire #6.

The Joker is highly unstable, which means he is unpredictable and lacks fear, sometimes failing to consider every potential outcome of a situation.

Which superhero is stronger, Harley Quinn or The Joker? 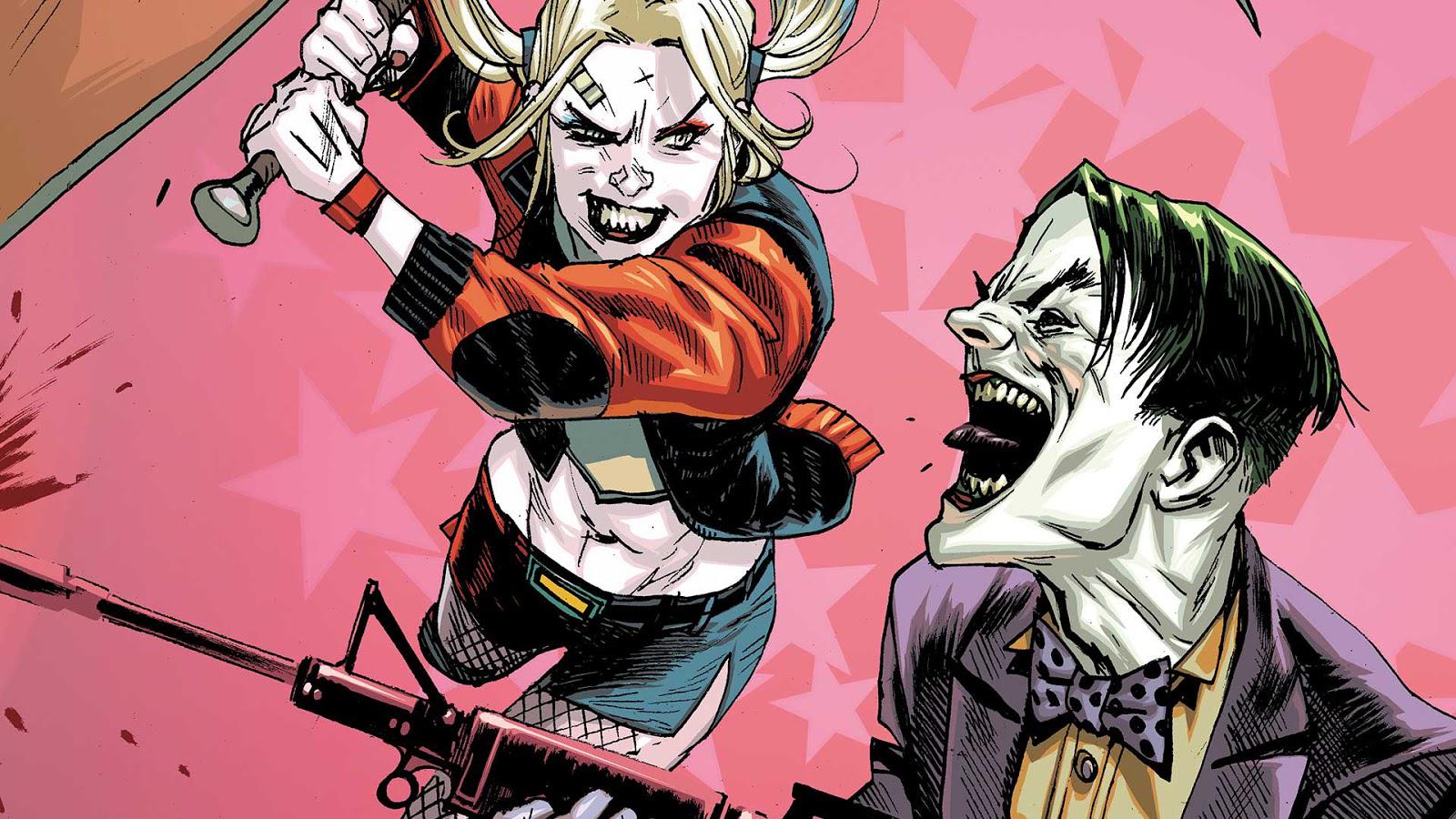 When it comes to physical abilities, there is one clear winner of Harley Quinn Vs The Joker.

Harley Quinn is a skilled gymnast and martial artist, which means that she is extremely skilled at hand-to-hand close combat. On the other hand, The Joker almost always relies on trickery and weaponry during fights.

Harley was also injected with a serum by Poison Ivy that enhanced her strength, speed and agility. When we consider that she was already in peak physical condition before, this serum will no doubt have furthered her advantage over The Joker.

In addition to this, Harley Quinn benefits from being a part of the Gotham City Sirens - no matter how dubious and moral-lacking this group might be. If Harley was to be outdone on strength, her team would be more than willing to help back her up - as would her pet hyenas, for that matter.

However, what The Joker lacks in strength, he more than makes up for with trickery, strategy and manipulation. This means that The Joker might be able to leave Harley momentarily distracted, in which he would have the perfect opportunity to strike.

Who would win in a fight between Harley Quinn and The Joker?

When it comes to Harley Quinn vs The Joker, the short answer is, it depends if it is a physical fight or if it's more psychological. As mentioned above, Harley Quinn is by far in better physical condition than The Joker, thanks to her gymnastics and martial art skills. But, when it comes to the psychology of it all, it becomes much more complicated. On one hand, The Joker is probably more likely to do whatever it takes to win, including to kill his ex-lover. If Harley is still under The Joker’s spell and still loves him, she might still be susceptible to emotional manipulation. On the other hand, in modern iterations of the character, Harley is presented as a strong woman who has escaped an abusive relationship. She has the desire to regain her life after what he put her through. This then means that Harley might be out for revenge, fuelled by anger, and thus would also go to extreme lengths to win. Due to how unstable both of these characters are, it is likely that there will be no winner in Harley Quinn vs The Joker. However, if we had to put our money on just one of them, we would love to see Harley Quinn get her revenge!

See Harley Quinn vs The Joker for yourself
For a wide range of DC Comics featuring all your favorite heroes and villains, including Harley Quinn and The Joker, look no further than Quality Comix. Quality Comix is America’s number 1 vintage online comic book store, with over 20 years of experience in buying and selling rare and collectible comics.