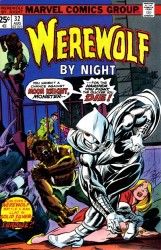 There are only 19 registered copies of Werewolf by Night #32 in NM/MT 9.8. Compare that to 119 of Wolverine’s first appearance and one might say that the current value of this book is low in comparison. There are very few recorded sales of this book in 9.8 but it jumped from $3,000 in 2013 to $14,500 in 2015. In October of 2019 a lower grade NM+ 9.6 brought $12,000 showing the huge growth of the character’s overall value. The ship has sailed on getting the high grade books “cheap” but there is still potential for growth given the current landscape. You can still grab mid grade books (FN 6.0) around $1,100 currently. However to understand how dramatically the book has increased let’s look at 2009 when the book was bringing less than $75! That is nearly 15x the money! Low grade books were so valueLESS they weren’t being tracked back in 2009 but now a GD 2.0 will run between $300 and $400. Buyer beware when purchasing in a hype driven market. While the books should enjoy permanent increased value there will be a settling period after things calm down. Only the extremely high grades will reap the initial reward.

Moon Knight was the brainchild of Doug Moench, prolific Marvel writer at the time. He collaborated with Len Wein to cement the final details over a phone call in early 1975. Contrary to popular belief the Moon Knight was not created to give Marvel a “Batman”, if anything they already had one in billionaire genius Tony Stark. Moench was writing Werewolf by Night at the time and looking to put his stamp, his unique creation in the pantheon of Marvel story writing and needed a villain to hunt the Wolf. Moon Knight was garbed in silver and designed from the ground up to be a werewolf slayer. With the recent announcement by current owner, Disney, that the Moon Knight would be getting his own series the character has enjoyed renewed interest.