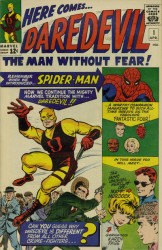 This valued 1964 release is THE original Daredevil, The Man Without Fear. Matt Murdock is blinded but begins to patrol Hell’s Kitchen. Multiple superheroes cameo in this issue including the Fantastic Four and Spider-Man.