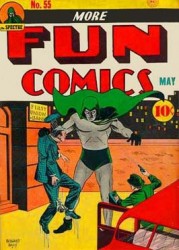 Kent Nelson (as Dr. Fate) makes his first appearance, and Wotan and Inza make their first appearance in More Fun Comics #55, published by D.C. Comics in May 1940. The Spectre faces Zor, a villain who is as powerful as he is, and fights to overcome him before he harms Clarice. The villain Wotan kidnaps Inza Cramer in order to get closer to Dr. Fate, causing Fate to save Inza.