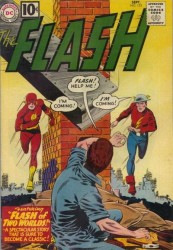 The first mention of Earth II occurs in Flash #123, published by D.C. Comics in September 1961. The first time Barry Allen meets his Earth II counterpart is in Flash of Two Worlds! Chapter 1 when Barry meets The Flash from the other Earth, Jay Garrick. Jay enlists Barrys help to stop The Thinker and The Fiddler.