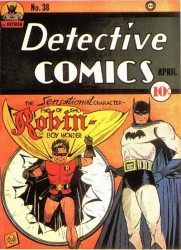 Robin makes his first appearance when his origin story is told in Detective Comics #38, published in April 1940 by D.C. Comics. Dick Grayson is witness to the murder of his parents. He overhears the killers confessing, and decides to bring that information to the police. However, Batman intervenes when the boys life is put in danger, and instead trains him to be his partner in crimefighting.