An anthology comic featuring four ninja shelled-guys with a passion for Renaissance art! See what copies that are floating around are selling for by using our online price guide! 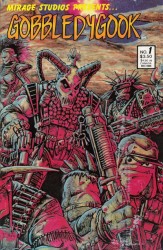 Goobledygook was an anthology series first published in 1984 with two issues. In 1986, a Vol. 2 was released, featuring 100 pages, over 12 stories, and three stories relating to the Teenage Mutant Ninja Turtles, a group of turtles exposed to radiation that became ninjas to fight crime.

The comics from Vol. 1 and 2 are one-time specials, featuring side stories by Mirage Studios and some tales related to the TMNT. They weren’t meant to be comic series, as there are just three issues in total under the name Gobbledygook.

This issue is highly sought by collectors, and an issue can sell for as high as $100,000.

Browse our selection of key issues from Gobbledygook below to get an instant estimate of their value. 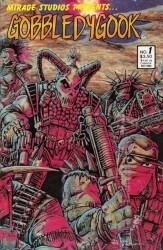 Gobbledygook is a black and white anthology comic produced by Kevin Eastman and Peter Laird in 1984. If those name sound familiar it's because these are the same chaps that introduced the world to The Teenage Mutant Ninja Turtles! This book is not to be confused wit the color one shot with the same name produced two years later. The extreme value of this book doesn't come from the fact it's the first appearance of the Fugitoid (the who? Exactly!) it comes from the fact that there is only 150 copies in the world and they were hand produced by Eastman and Laird with a copying machine and staples! Buyers be wary, this is an easy book to counterfeit due to the way it was made. Do your researcha nd make sure it's a trusted seller or someone with evidence of the book's authenticity or some significant provenance!