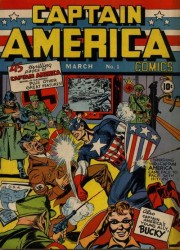 Captain America Comics #1 introduces Captain America to an America getting ready to enter World War II in early 1941.   The first iconic issue features Captain America punching out Hitler on the cover.  Cap's biggest Nazi archenemy, the Red Skull, was also introduced in this issue!  Most superhero comics from this time period are propoganda pieces for the war, but Captain America is one of the the most blatant examples of this.  Cap has maintained his popularity over the last 80 years, appearing in cartoons, comics and the latest Marvel movies!